Manufacturers have started showing the Wi-Fi version on their devices, so clients will see if they don't have latest Wi-Fi 6 access points.
Bjørn Jensen 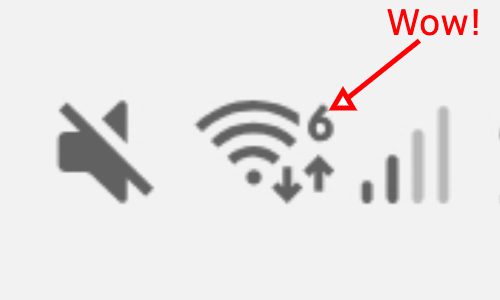 Have you seen this? Devices now indicate which version of Wi-Fi they are using, which means more clients will demand Wi-Fi 6 wireless access points.
Article:
Networking | News | Wireless
September 2, 2020

Target Wake Time, WPA3, OFDMA, etc. are some of the best advancements of Wi-Fi to date and are all included with new 802.11ax (Wi-Fi 6) devices.  All of these improvements aside, there is one minor, but very important and often overlooked reason to offer these to your clients. Gone is the old 802.11x scheme that was confusing and esoteric to the uninitiated, and instead we now have easy to understand Wi-Fi 4, Wi-Fi 5, and Wi-Fi 6.  Each represents its own generation of Wi-Fi. For example, Wi-Fi 5 was formerly known as 802.11ac and Wi-Fi 6 is the newest 802.11ax.

This labeling doesn’t really seem all that important from a sales side other than that it’s much easier to tell an end user they’re moving from Wi-Fi 5 to Wi-Fi 6 instead of saying they’re moving from 802.11ac to 802.11ax. It’s all about optics and that’s where this gets interesting, and very important.

We all know that top speeds on a single device are less important than aggregate overall speeds of many devices on the network. We also all know that some homeowners who like to show off to their friends don’t really care about that and all they want to do is show their friends how fast their one device can connect to the internet.

Now, imagine you just sold a homeowner a brand new wireless network with 7 APs. No matter which manufacturer you decide to sell, 7 APs can add up to some serious money (even more so if you use Enterprise grade gear).  Two months from now they go to buy a new phone and they’re excited because it has “Wi-fi 6” and they can’t wait to try it on their new home network and show their friends. Unfortunately for you, the APs you put in are Wi-Fi 5 and now the homeowner doesn’t see the following on their phone:

From what I’ve seen so far this doesn’t always mean what it looks like it’s supposed to mean. Some people have mentioned that they are using a Wi-Fi 6 capable phone and seeing this image even when connected to a Wi-Fi 5 network.

I have a feeling that will change eventually and it will properly show the type of connection you’re currently receiving just as your cellular connection will change from time to time depending on your connection (notwithstanding the fake AT&T 5Ge). I know that my new Samsung Note will reflect the little number 6 only when I’m connected to a Wi-Fi 6 network.

In a nutshell, in order to avoid the eventual questions and complaints by homeowners that they just spent X amount of dollars on a new network and it’s “already obsolete,” do yourself a favor and begin specifying Wi-Fi 6 APs in all of your new projects.

They’re not much more expensive and if the client says “no” at least you can bring up the fact that you gave them the option at the time.  Not only will you be doing them a huge favor because as more Wi-Fi 6 devices come online, they’ll be able to see their network actually improving over time, they’ll also be able to enjoy faster speeds and better security, but they’ll also get that shiny new label to show off to their friends.