52,000 total attendees graced the floors of the RAI in Amsterdam this year, according to a report attributed to ISE managing director Mike Blackman.
D. Craig MacCormack

Surely, ISE 2020 organizers had grander hopes for their final event in Amsterdam before the world’s largest pro AV show moves to Barcelona next February, but coronavirus-related health scares and travel woes from high winds made this year’s event the smallest in at least five years.

In a tweet shortly after the show closed, Integrated Systems Europe managing director Mike Blackman confirmed ISE 2020 had 52,000 visitors, a drop of about 30,000 people compared to the record-setting crowd in 2019 of 81,268.

LG was the only prominent manufacturer known to have withdrawn from ISE 2020, although many of the Chinese companies that were slated to exhibit at the show withdrew out of caution related to the spread of the coronavirus in that country and around the world.

Many attendees reported having trouble getting to Amsterdam when they had planned to be there, but it’s unclear how many of those people didn’t make it to the show at all. While some on social media said the crowd was down a bit at the RAI, a 30,000-attendee drop seems more pronounced than expected.

In an interview with CE Pro‘s sister publication Commercial Integrator a few weeks before ISE 2020, Blackman was confident the final Amsterdam show would set another attendance record before it moves to its new location in Spain next year. Clearly, he couldn’t have predicted the spread of and fear about the coronavirus or travel delays and cancellations.

ISE 2021 will be in the Fira Gran Via in Barcelona Feb. 2-5, 2021. Blackman expects the space to have more dedicated meeting rooms for those who want to talk somewhere other than on the trade show floor. He also expects more designers and builders to come to the show in its new location. 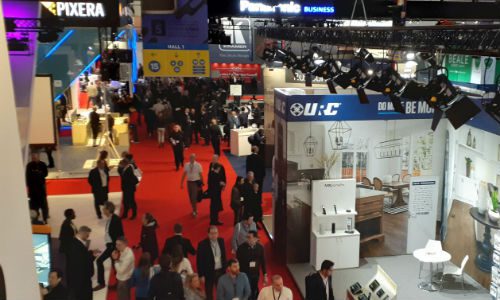 “The problem we had last year was it was uncomfortable,” Blackman said in an earlier interview with CI. “It was too crowded (on the second and third days of the 2019 show). We’ve run out of space for our exhibitors and our attendees.”

Surely, ISE officials would have liked to have had that problem one more time in Amsterdam rather than be faced with attendees and exhibitors who were either scared to come or unable to get there because of the weather.

The silver lining is next year’s ISE attendance will likely show an even higher spike now than was already likely with so much more room to roam.

“Barcelona gives us a new platform,” said AVIXA chief global officer Sarah Joyce in an earlier interview with CI. “It’s not just a platform of growth and expansion of floor space, but there’s a mental shift we can all take in going there. We can offer different types of conferences and events.

“The opportunity is considerable to not only expand the (attendance) numbers, but the type of programs,” she said.