For integrators seeking to target homebuilders with smart home and security solutions, Nortek Control has a double-barreled option: ELAN or 2GIG. Both brands offer a different business model for integrators, according to Chris Lynch, manager of builder services at Nortek Control, but both have the goal of getting builders to commit to a technology standard I the homes they construct.

“Whether it’s 2GIG or ELAN, the goals and benefits of either program differ greatly,” says Lynch. “For the ELAN new home program, the motivation for our dealers is to sell and install as much ELAN as possible because that’s how to make the money off margin. Traditionally, an ELAN dealer will have a relationship with the builder. If the product wasn’t a standard, the dealer would have to a convince the homebuyers that they need technology. Once they have convinced them, then they can talk about what they want to add to the system and what’s important to the homebuyers in terms of safety and security, peace of mind, music and entertainment.”

But the approach is different with 2GIG. “With 2GIG, the motivation for those dealers is different. They need to meet with every single homebuyer because they want to get recurring monthly revenue (RMR) to monitor the security system. So we built the program around that,” says Lynch.

“However, on the security side one of the things that we do to differentiate and allow homebuyers to personalized the technology in their homes is we’ve created personalization packages that go with that package,” he adds. 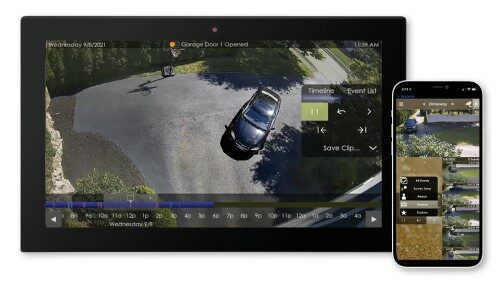 Lynch explains that a standard package built around 2GIG might be a 2GIG EDGE panel, some exterior security lights, a video doorbell and a smart thermostat. On top of that, a complementary personalization package could include whole-house audio, some architectural speakers, a Sonos amp, Wi-Fi, or video surveillance cameras. Lynch says the idea is to make the packages very lifestyle oriented and easy to understand for the homebuyer.

The flexibility to use either ELAN or 2GIG is one of the cornerstones of Nortek Control’s builder services program, which was created 5 years ago. He notes that the ELAN program resonates largely with semi-custom luxury builders, but the company is seeing some dealers adapt the ELAN program to suite production builders too.

“I think we’ve done a disservice to builders telling them to focus on the ‘shiny object’, and telling them  a smart home is a video doorbell, Amazon Alexa and a couple lights,” says Lynch. Instead he believes integrators need to stress to builders that they should solely focus on the technology infrastructure in the home. That infrastructure has three primary elements:

“If the builders do that, they’ve really done their job from a sales and marketing standpoint,” he concludes.