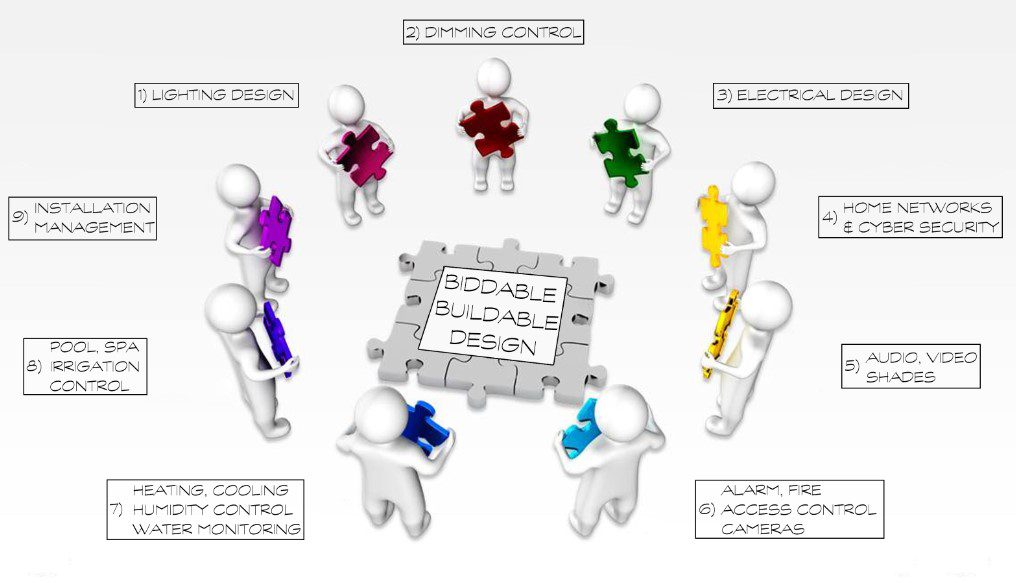 Integrators and lighting design/engineers are both part of the puzzle necessary to create solid biddable and buildable designs.

The L.A. Rams may have had the “Fearsome Foursome” back in the 1960s, but today’s modern design team is a “Forceful Foursome” consisting of the architect, designer, integrator and lighting design/engineer.

“This is the modern design team,” says Glenn Merlin Johnson, noted lighting designer and president of Adaptive Design Group, a Park City, Utah-based lighting design and engineering firm. “Obviously, it starts with an architect and an interior designer but it’s critical to round out a cohesive team with the technical team. That starts with lighting design, which means having an electrical engineering specialty firm and then bringing in the integrator to not only handle the lighting control but the rest of the audio, video, surveillance and home network.”

It is also vital that this cohesive team is gathered together early in the design-build process. Too often both the integrator and/or the lighting designer are brought in way too late in the process, which is a disservice to the homeowner and wreaks havoc on the construction schedule.

With an architectural design and tech team on a project early, the homeowner can be educated on the latest technology solutions before the plans are released. The three stages in the architectural planning process are:

“The perfect time for the tech team to be brought in is at the end of schematic phase and the beginning of the design development phase,” says Johnson.  “The problem is most architects are cranking away to try to get their drawings and documents out to the city for permits because the owners are excited to break ground. The problem with that timetable is that means the plans are generic and usually have minimal information in them because they want the building department to look at the plans and approve them quickly.”

By minimal information, Johnson means locations of the power outlets, smoke detectors, lights and the electrical panel, and not much more.  It’s rare to see plans with space dedicated for the technology closet where lighting panels would be located.

Those basic plans thus create a snowball effect because the electrician is now bidding his package to the general contractor based on that set of documents.

“The electrician looks at the plans and sees a bunch of circle symbols for standard switches and just counts how many he is going to need. There is nothing in the plans specifying the types and sizes of the downlights, for example. He knows he is bidding against two other electricians for the job so he is going to spec the lowest cost on every product and bid a minimal amount of labor.

The GC then puts it into his full package and tells the homeowner, ‘This is the price I can build your house for.’ Guaranteed there is no lighting control or quality recessed lighting in the proposal. And the homeowner is now going to the bank to get a loan based on that proposal. It becomes an upstream battle from there on out for the integrator and lighting designer,” explains Johnson.

Ideally, there is a kickoff meeting with the homeowner, builder, architect, interior designer, integrator and lighting designer that takes place early in the construction process. There, a lighting designer like Adaptive Design Group and the integrator get a chance to discuss lighting control and the electrical needs. The trade partners should not feel threatened by the conversation because the lighting engineer is not selling any product or taking away any decisions from the rest of the team, particularly the interior designer.

“I basically educate the entire team on the ADAPTIVE Method™ and the integrator can discuss integrated lighting control, along with the AV. From there, we all go off and do our thing,” he adds.

The best business scenario for the “forceful foursome” is to each have a direct relationship with the homeowner while working together as the modern design team using the latest architectural floor plans with details showing the reflected ceiling plans, interior furniture, carpet and area rugs, coffee tables, motorized shades, and more.

“We take all that information and we layer it all into one document so there is a floor plan, furniture plan and art program. Then the reflected ceiling plan has our lighting and controls and we coordinate that plan with the integrator on speaker locations and types of bezels or grilles in proximity to the automatic sprinklers. We become so much more than just a lighting designer by doing coordinated reflected ceiling plans that the builders absolutely love. That’s why I like to call it architectural lighting design; we are doing so much than just throwing circles on a plan and writing the spec,” explains Johnson.

He adds, “The best part is that all the integration information goes into the full architectural package with my stamp of approval on it and the integrator’s stamp of approval on it. Now when that entire package goes out for bid, we are going to have success because we have coordinated with the homeowners on this complex design with all the moving parts and pieces. Yes, the owner is going to pay a little more money for this coordination of design but with the tech team working together with the builder as a modern design team, it is fun… we are all having fun and that’s the key. We are all getting old… we want to have fun!”