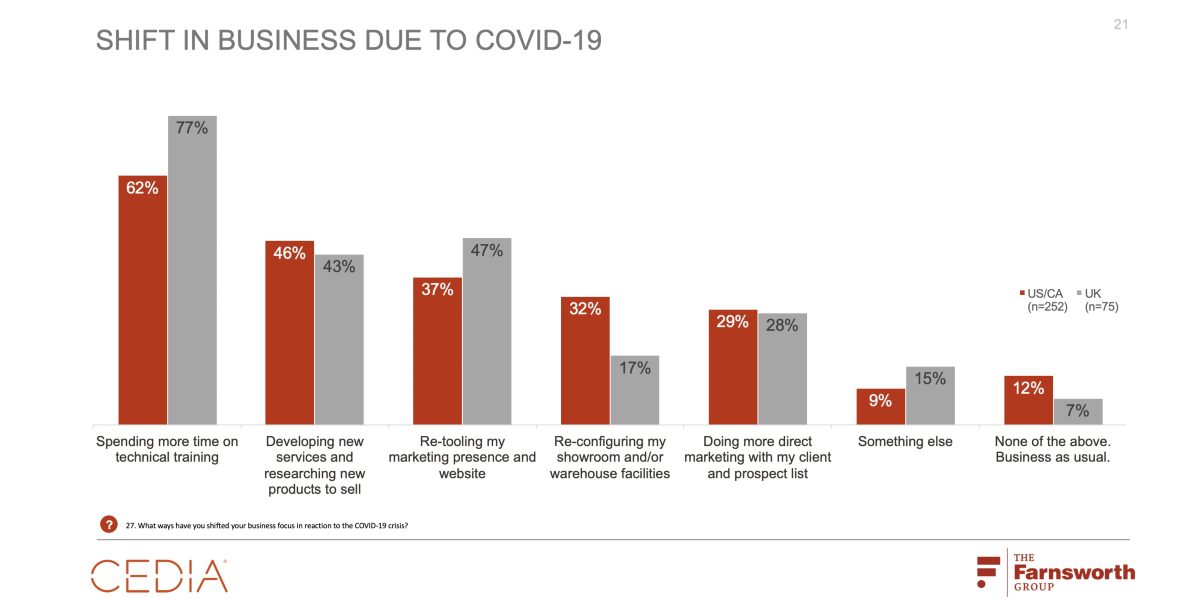 Integrators have been focusing significantly more on continuing education during the coronavirus outbreak, with 62% of those surveyed (in the U.S) suggesting they've spent more time on technical training recently. 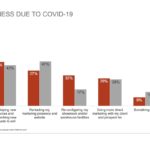 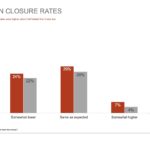 Confirming with hard data what many in the industry already knew anecdotally, CEDIA has revealed the findings of its COVID-19 Impact Study and the numbers are not pretty. Like most other businesses around the world, custom integrators in the U.S., Canada and U.K. are experiencing lower revenues, concerned about paying their bills, and worried about the safety of their staffs.

Moreover, new sales that are occurring during the coronavirus pandemic are at lower price points on average. Nearly half (46%) of U.S. and Canadian integrators have either laid off or furloughed staff, and among those that have trimmed their staff numbers, the majority have let go more than half of their employees.

The survey was conducted by The Farnsworth Group from April 13-28 and had 344 worldwide respondents. In general, integrators in the U.K. are faring worse than those in America.

“It is not a big shock that there is a large negative impact on how COVID-19 has impacted businesses,” says Grant Farnsworth, director of business strategy and managing partner at The Farnsworth Group. He was joined by James Bliss, CEDIA EMEA Brand and Communications Manager for a webcast to dig deeper into the data.

About 90% of system integrators reported they are doing less work because of COVID-19 with the top reasons being homeowners not wanting contractors in their homes, government mandates, homeowner finances, and person discomfort being in close contact with others. Most integrators are currently expecting project delays to last about 1 to 3 months.

Most companies have experienced or plan to implement layoffs or furloughs. Nearly all integrators are concerned for the future of their business, with about half stating extreme concern primarily due to the ability to pay bills, the health of their staff, and the ability to get project requests.

In general, smaller integration companies are in a more dire situation than larger firms, says Farnsworth. “The larger the firm, the more likely they are to stay financially stable during this crisis,” he points out.

Bliss notes that the primary reason for the U.K. dealer community being hit so much harder has to do with the national policy in Great Britain compared to the state-by-state restrictions in the U.S.

Looking forward, Farnsworth says there is no way to predict the future.

Positive Signals from the Data

On the bright side, integrators report a surge in home network installations since the coronavirus hit. The data show that 8% of integrators say their home network projects are up significantly, and another 30% say that subsystem business has increased slightly. Another 25% of integrators report their home network installation business has remained unchanged since before the lockdown. This trend clearly points to the growth in home offices and the reliance homeowners have on their Internet connections while stuck at home.

Another positive signal from the data is that the worst appears to be over. Farnsworth tracks weekly data across the entire home construction industry and the impacts appear to be lessening.

Some of key data points for U.S. integrators from the study are: