So what has business been like for the past month for “essential” custom integration firms during the coronavirus crisis?

Dan Fulmer, CEO and founder of FulTech Solutions in Jacksonville, Fla., tells CE Pro the impact of the novel coronavirus COVID-19 on his area of the country has brought both challenges and opportunities. But overall, the company has kept busy amid the COVID-19 outbreak.

“I’ll say that after 25 years in business, the last month or so I’ve probably worked as hard or harder than I have [since] the early stages of my business just to keep my pipeline filled in order for us to keep working,” Fulmer said on the latest episode of the CE Pro Podcast.

FulTech Solutions, a former recipient of the CTA’s Mark of Excellence Award as Integrator of the Year, has experienced highs and lows during this unprecedented time, Fulmer conveyed. He acknowledged that he’s spoken with peers who are doing likewise, but the amount of continuing work varies greatly depending on where they’re located around the country.

For his team, the first thing Fulmer did as shutdowns of the economy began was to ask employees if they wanted to keep working. They did, and once that issue was taken care of FulTech began the process of procuring provisions to properly outfit personnel, including Fulmer himself, with protective measures as they began dealing with clientele.

As many others have found out, those efforts come with their own obstacles.

“When this all started out, I figured that we would be deemed an essential business because of the networking and video conferencing and what not, and wanted to keep our team working so I immediately went online and started looking for masks, booties and gloves,” Fulmer recalled.

“Booties and gloves weren’t too hard to find – you’re not going to get surgical gloves, but mechanic gloves, other kind of gloves like that … the masks were a real problem.”

Deliveries were slated for anywhere from May to July, and in some instances orders were even canceled. Eventually Fulmer found and ordered boxes – at steeper prices than they ordinarily would be, but it simply had to be done.

From there, FulTech has been prioritizing commercial jobs and taken great precaution handling residential requests beyond some of the technology that’s really become essential. Naturally, some projects have been put on hold, some were canceled, but things like home networks for work-from-home and schooling-from-home are critical now. 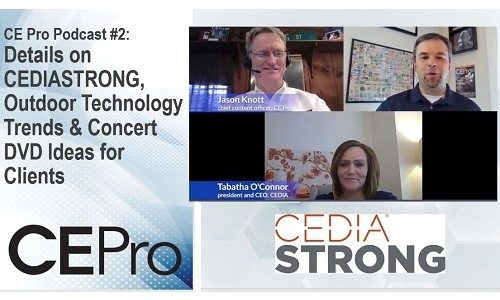 “We’ve done a lot of networking, home Wi-Fi stuff … several clients that have multiple kids. They have so many kids home trying to do their schooling at one time they actually had to send some of them to a relative’s house because they didn’t have the bandwidth to handle it,” says Fulmer.

“That’s coming up a lot. People don’t realize how limited they are until they try to max things out of course.”

For much more details on how Fulmer, a CTA TechHome Leadership Award winner, and FulTech Solutions have navigated dealing with employees, filling the project pipeline, finding protective gear and more, watch episode 3 of the CE Pro Podcast above. Also, be sure to subscribe to CE Pro’s YouTube channel to see previous weeks’ installments.