HTSA executive director Jon Robbins says 2020 was unlike any other year he has experienced in 45 years in the industry.

Walking into the camera and exasperatingly pulling off his mask, HTSA’s executive director Jon Robbins breathed a literal sigh of relief as he kicked off the HTSA Spring Conference with his “State of the Union” address. Robbins described how the members successfully navigated the past year during the COVID-19 pandemic with 17.5% sales growth in 2020, and optimistic double-digit increases on tap for 2021.

“It is interesting times, obviously. In 45 years, I thought I had seen everything in this crazy industry, but wow… the last year has really been mind-bending to say the least,” says Robbins. The Home Technology Specialist of America (HTSA) Spring Conference was a virtual event that replaced a planned in-person event set to take place in Fort Lauderdale, Fla.

“A year ago at this time we were all kind of looking at each other and saying, ‘Alright… what’s this pandemic going to bring with people closing their businesses and not able to send technicians into clients’ homes. It was concerning. We did not know where it was going to go.

“Who knew that our industry would actually benefit from some of the really unfortunate circumstances that took place?” Robbins asks rhetorically.

Robbins reports that HTSA members ended the year up 17.5% in terms of vendor purchasing. Specifically, he reported there was a 20% increase in vendor purchases through the end of first nine months of 2020. That growth was despite “really difficult” months of March and April.

He noted that the summer months were very strong in terms of sales for members, but the last quarter of 2020 “seemed to flatten out” when compared to the summer, just was still very strong.

“Absolutely a win … we were very happy with those numbers,” he comments. The news is even better so far in 2021. Through February, among HTSA members that had reported, overall sales were up approximately 22%, according to Robbins, who called it “amazing” because “in January and February 2020, none of us knew about COVID. That was before the start of us getting hit.”

As the buying group heads into 2021, Robbins admits there are a lot of questions lingering in the air.

“We have different questions than we had one year ago at this time,” he says. “Does the growth continue in 2021? Has the novelty of doing things and fixing things technologically in your home worn off? Are we in for some post-pandemic doldrums? Will other industries like hospitality grab the public’s disposable income? These are all really significant questions that we need to answer.”

Even with all these questions, Robbins says HTSA is bullish on 2021. He cited the “hot as a pistol” real estate market for both new and existing homes.

“We feel that consumers have a new appreciation for the need for quality technology in their homes after experiencing 2020,” he says. “We think any positives will offset negatives and business will remain strong throughout 2021.”

To that end, HTSA queried 40 of its members to give a forecast for their business over the next four months. The queries were even split among four regions of the country. Overall, HTSA member integrators predict gross revenue gains between April and July of:

Anecdotally, some members noted that they expect the second half of 2021 to be even stronger than the first half, lending even more credence to a solid outlook for the year. 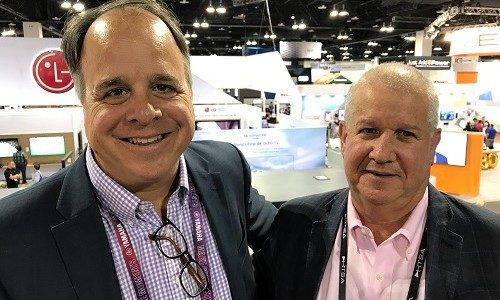 Related: Change Is the Only Constant for HTSA During Pandemic

Robbins and the executive team at HTSA, which includes Tom Doherty, director of new technology initiatives, and Keith Esterly, chief learning architect, realize that the best way for its members to maintain strong business growth is to stay ahead of the curve, which was the focus of the buying group’s spring conference. The event had a different structure than the group’s fall meeting due to “basic virtual fatigue” and “pandemic brain fog” that everyone is experiencing, comments Robbins.

The event itself was structured with four sessions per day only that were repeated to hit both West Coast and East Coast integrators at their most convenient times of the day.  For example, day one of the event on April 5 had sessions start at 12 noon EDT and then again at 4 p.m. EDT that covered talent recruitment strategies, an update on combatting cyber threats, handing HR-related issues in a remote world, and how to build your brand. Both sets of sessions were followed by live Q&A with the presenters.

Over the three days, more than 500 participants engaged with the association’s vendor partners, educational sessions and most importantly with each other, according to Esterly.

Robbins kicked off his 27-minute presentation by introducing HTSA’s four new members, including: