Electronic Lifestyles designs a motorized system that makes a Stewart Filmscreen Wallscreen vanish from view when not in use.
CE Pro Editors 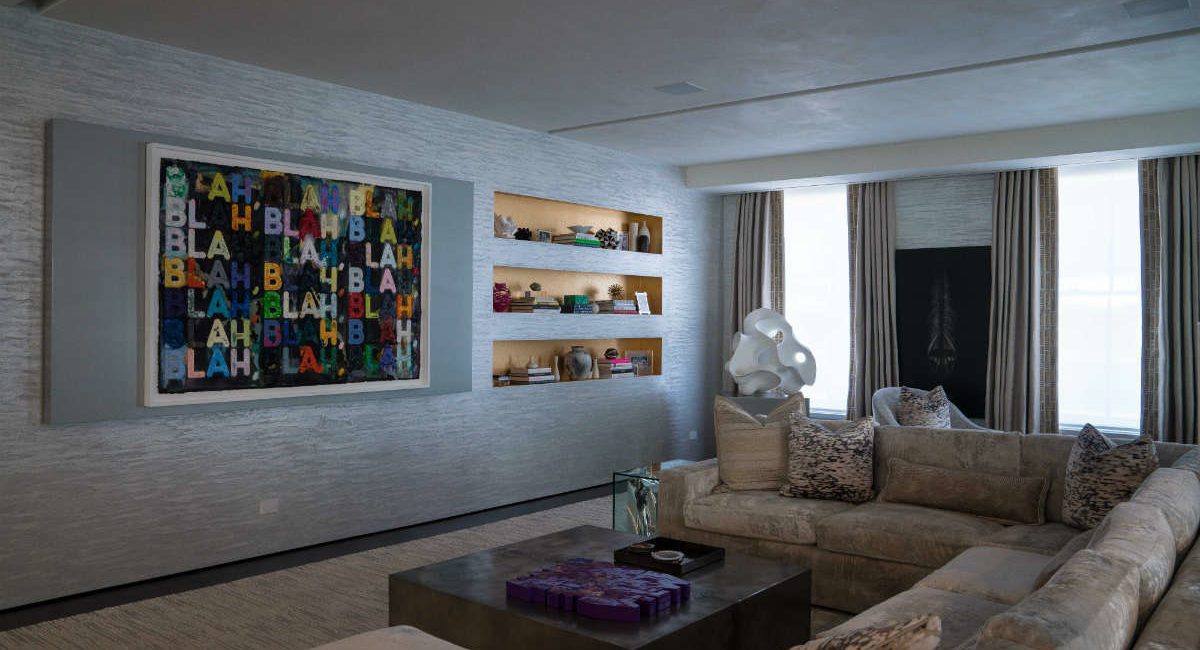 By learning to conceal a projector screen behind a work of art, integration company Electronic Lifestyles provided exactly what their customer wanted.

It was 10 years ago that the audiovisual industry adopted the term “techorating” to describe the art of blending technology with a room’s interior design and décor. Many homeowners still seek to match their audiovisual systems with the aesthetics of the surrounding space.

But the prevalence of multi-use spaces in today’s homes, and especially in luxury urban apartments, has given rise to another trend: Making technology disappear from view when not in use.

The client had multiple pieces of artwork to display, and he didn’t want the projection screen, speakers, or other technology components to distract from the art collection or the room’s overall design aesthetics.Electronic Lifestyles, a home technology integration firm based in Long Island City, N.Y., faced this challenge when called on to install a two-piece projection system with accompanying speakers, A/V and lighting control in a luxury high-rise apartment in the Manhattan neighborhood of SoHo, New York City.

“The room is essentially used as a living room instead of a media room,” says Electronic Lifestyles president Franklin Binns. “It was expressed to me early in the project that the client and the designer did not want to see any electronics when they weren’t in use.”

The client also wanted a system that would allow him to watch movies the way the director intended, on a full 120-inch diagonal 16:9 projection screen, providing the ultimate in image fidelity and high-quality sound. 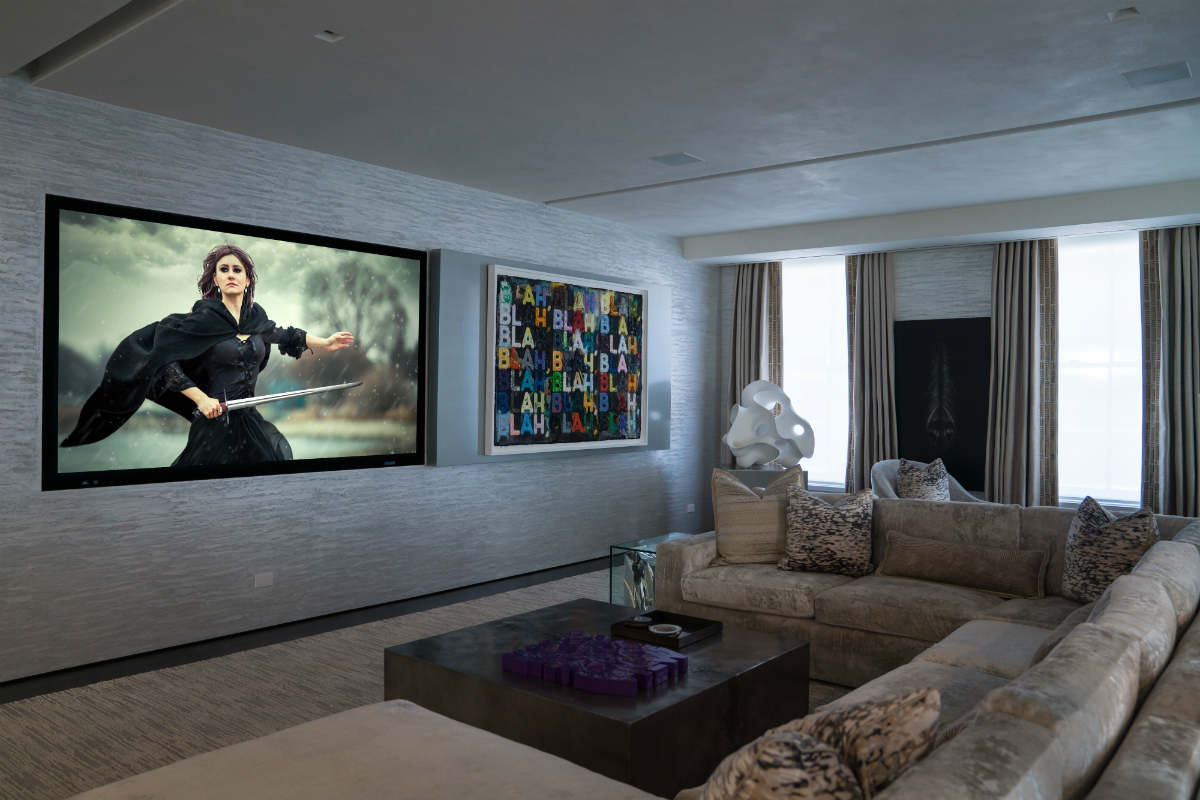 For the project, integrators designed a mechanism to move the artwork from left to right, allowing the homeonwer to reveal the projector screen at will.

“We went with a Luxus Deluxe fixed frame model with FireHawk Microperf material from Stewart Filmscreen and then devised a way to conceal it,” says Binns, calling this endeavor one of the most challenging aspects of the project.A home technology designer’s first instinct might be to install a drop-down screen, recessed into the ceiling, and then work to creatively mask the other components within the room’s interior design. But the lack of headroom made a dropdown-motorized screen impossible.

Although the Luxus Deluxe Wallscreen is designed to hang flat, the general contractor created a niche that permitted the Electronic Lifestyles team to recess it, instead. “It’s definitely a custom design and not something that’s typically done,” says Binns.

Creating a cut-out in the wall for the screen may not have been difficult, aside from two factors: The master bathroom sat on the other side, and the speakers also had to be concealed within that recessed space.

“The plumber had to change his approach to laying out the plumbing to make room for the screen and speakers,” says Binns. “It definitely called for coordination between my team, the plumber, and the general contractor.”

With Sonance Cinema left-center-right speakers hidden behind the Microperf screen, where they would provide impeccable sound yet remain invisible, Binns faced the task of hiding the screen when not in use. 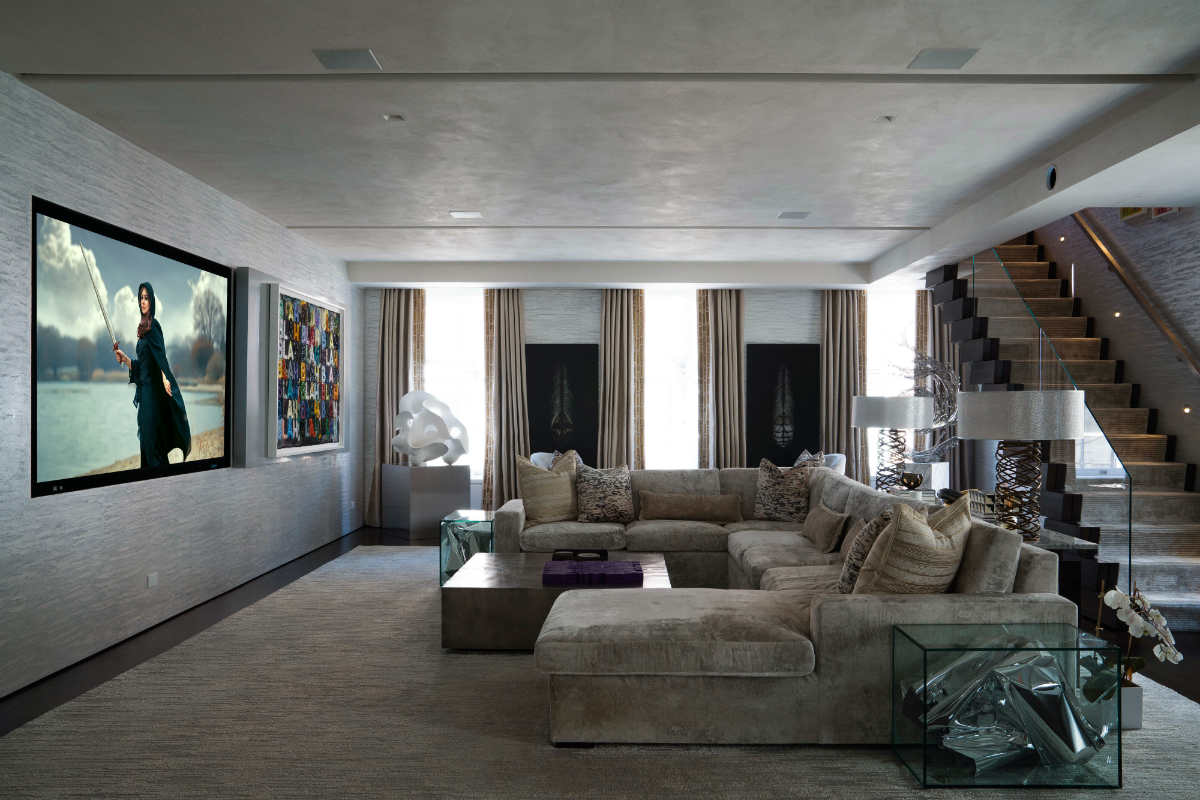 Due to the screen being shallowly cut into the wall, it appears to sit flush with its surroundings.

The obvious answer in a room filled with artwork? Place a piece of art in front of the screen.

When the projection system is turned on, the artwork moves to obscure a bar located to the right of the projector screen.

“Electrokinetics typically makes mechanisms for moving panels, but they are designed for TVs, not artwork. The artwork was very heavy, so the mechanism was custom-made for this project, designed as a collaborative effort between Electrokinetics and us. Overall, we are very proud of how it came out,” says Binns.

Electronic Lifestyles successfully met the client’s desire for an immersive entertainment experience within a formal living area, where even the sleekest and most attractive technology components would look out of place. Thanks to the creativity of Binns and his team, the client was able to merge his love for fine art with his passion for movies and media.