Thanks to a collaborative effort between integration firm Gramaphone and home theater specialists AcousticSmart, this 'Stargate' fan was able to finally enjoy the home theater of his dreams.
CE Pro Editors

This BEST Project Award winning home theater was years in the making — from the huge influence of the movie “Stargate” and subsequent “Stargate SG-1” TV series on the customer, to when he expressed this passion to integration firm Gramophone back in 2016, through to the planning and completion of the impressive finished product.

“He had dreamed of a Stargate-themed theater system for many years, and had a dedicated space laid out when his home was built years ago,” says Lee Kirby-Smith, Gramophone sales consultant for this project.

“I believe the impetus for the project was one of our in-store events where we bring in different vendors to present their products to our clients. He was so impressed with some of the demonstrations that we scheduled a meeting at his home the following week.”

Kirby-Smith says the project was a departure from anything he’d been a consultant on — other themed theaters either revolving around sports teams or movies, but not nearly to this extent.

“This client wanted to take this to the highest level possible and with the utmost real-ism,” he says. “Most everything in this theater was custom, from the sconces that mimicked lighted torches to the relief work on the doors, handrails, and the custom pedestals with color-changing LED lighting for the Anubis.”

Gramophone collaborated with theater specialist AcousticSmart and builder/fabricator Michael Sheehan on the design, which had to balance replicating an Egyptian temple and its rough-hewn stone without compromising sound performance. 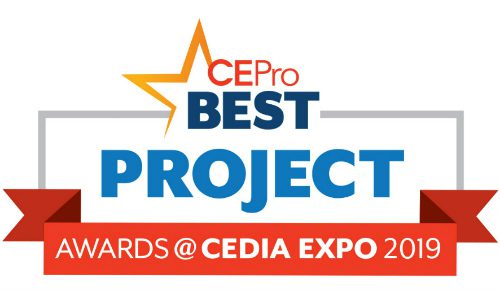 AcousticSmart came up with samples of photos 3D screen-printed onto acoustic fabric for the client to see. After multiple iterations, the team came up with something that had the look of stone even when viewed close up. The fabric was then placed over absorptive acoustic material.

Of course, with walls that look like stone this theater has to rock. An 11.4.4 Wisdom Audio speaker system includes subwoofers placed in each corner. A Trinnov Altitude 16 preamp/processor drives a total of six amps, four JBL Synthesis and two Wisdom units. A Sony VPL-VW5000ES 4K SXRD projector beams onto a Stewart Filmscreen screen.

“One of the bigger challenges was creating a housing for the Sony projector that needed to drop down from the 20-foot ceilings in the theater,” says Kirby-Smith. Once that was figured out, the home theater was ready to go!