Kaleidescape celebrates 20 years in business with accolades from famed ‘Men In Black’ director, who offers a peek inside his home theater.
Jason Knott

Director Barry Sonnenfeld congratulated Kaleidescape on its 20th anniversary and noted it is the centerpiece of his own home theater.

Over two decades, Kaleidescape has always been on the cutting edge, both from a technology standpoint and from a legal standpoint. The company was the first to bring high-quality media servers to the home market, and it led the way in fighting Hollywood digital rights management (DRM). That’s why it’s quite a milestone as Kaleidescape celebrates its 20th anniversary this year. And to celebrate, acclaimed Hollywood director Barry Sonnenfeld is praising the company and offering a glimpse into his own Kaleidescape-based home theater in Telluride, Colo.

Sonnenfeld’s home theater has a 14-foot screen and an array of six subwoofers that are so loud he jokes that “people in other towns ask me to turn down my subs.”

“I became a Kaleidescape enthusiast when we were living in Telluride, Colo.,” recalls Sonnefeld, the director of the Men In Black franchise of films. “In 90% of the cases, I would rather watch a movie in a home theater. For me, the home theater experience has always been better than the movie experience.”

He continues, “You spend all this time making a sound mix for Men In Black… literally weeks mixing a movie… you spend weeks trying to get the color to match perfectly. And then I have gone to the world premiere to discover the subwoofers are out or the surround sounds are out. Whatever the medium… the weak link is the delivery system.”

Sonnenfeld notes, “In the case of home theaters, you have the most pristine environment. You have pink-noised it. You are watching it in the most perfect place and with Kaleidescape you are seeing it in full resolution. My screen is better, my sound is better… even with big blockbuster movies, the quality is so much better. I have a movie experience while at home… it’s amazing.”

Sonnenfeld spoke at CEDIA Expo 2019 about 4K, 8K and HDR issues in home theater, along with actor Patrick Warburton.

Kaleidescape was founded with the goal of delivering the ultimate home cinema experience. While its products have evolved, its purpose remains the same: to design and manufacture the industry’s leading home movie servers and players for custom installation.

“I started Kaleidescape, with co-founders Cheena Srinivasan and Dan Collens, in February of 2001. I had just built my first home theater at a time when the only practical movie source was a DVD disc. But DVDs were inconvenient to purchase, store, find, and play. We imagined and created new products and a cloud infrastructure that would deliver high-fidelity movies through the Internet, store them digitally in the home, automatically organize them, and make them easy to play in any room,” said Michael Malcolm, chairman of Kaleidescape’s board of directors.

At its inception, Kaleidescape’s founders united around a desire to do what they loved and create a company and products they could champion with pride. With a passion for movies and deep respect for experiencing them as the filmmakers intended, they saw an opportunity to bring films to life through immersive home cinema.

They built a team grounded in a shared dedication to their craft, and engineered innovations that stemmed from the realization that great home cinema is as much about audio as video; that what happens before the movie starts and after it finishes is just as important as the quality of the movie itself. As the lights dim, viewers are drawn deeper into the story by each subtle sound and ground-shaking rumble and held captive until the end credits roll and the lights slowly return. This is the transportive power of the Kaleidescape experience. 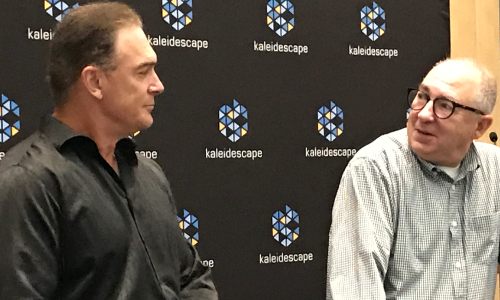 “Kaleidescape remains as elegant and unmatched as it began,” said Tayloe Stansbury, Kaleidescape’s chief executive officer. “We are more engaged than ever with our customers, our partners, and our dealers, to deliver the finest home cinema experience to our discerning audience.”

Garnering over 50 industry awards, Kaleidescape built a global brand with installations in over 80 countries and the finest superyachts. We transitioned from storing digital copies of customers’ DVD and Blu-ray discs to providing download access to thousands of iconic films.

Today, Kaleidescape has the largest collection of 4K titles with lossless Atmos audio available and boasts over 12,000 titles for purchase and more than 8,000 for rent. For those who want to enjoy opening night at home, our Premium Video on Demand (PVOD) feature provides access to just-released films. In addition to offering an expansive catalog of films, concerts and TV series, Kaleidescape prioritizes quality and ease by automating settings and curating instant scene access.

“I’d like to congratulate Kaleidescape for 20 years of providing a fantastic, secure, super high-quality source for true home cinema,” says Sonnenfeld, whose award-winning credits include his cinematography on Miller’s Crossing, Raising Arizona, Big, and When Harry Met Sally as well as his directorial work, including Get Shorty, The Addams Family, and the Men in Black franchise. Most recently, he was the show runner and directed many episodes of Netflix’s A Series of Unfortunate Events.

“I’ve had several home screening rooms in the last 30 years and I always tried to create an experience better than I can get in a commercial movie theater. I rely on Kaleidescape to deliver a truly fantastic image and incredibly great sound.”

Kaleidescape, which has proprietary metadata in its Internet-delivered movies, offers full 4K delivery of films with full-fidelity audio and video for luxury home cinema and sells its products exclusively through custom integrators.