As the consumer market continues to skew towards younger consumers it has become important for audio manufacturers to develop products and solutions that appeal to new generations.
Robert Archer

These are some interesting economic times. The consumer market is shifting with Baby Boomers, once the darlings of Madison Avenue, being swept aside for a new larger demographic that’s commonly known as Millennials.

For some perspective, the generation in between Millennials and Baby Boomers is Generation X, and according to Pew Research, its numbers won’t surpass Boomers until 2028. Pew Research points out that based on U.S. Census Bureau projections, the Gen X demographic is expected to plateau at 65.8 million in 2018.

It’s important to note that these numbers don’t translate into a hard transition in terms of which generation is the power spenders within the economy. What these numbers do represent, however, is that industries such as consumer audio have the opportunity to take advantage of a grace period in which they could develop a new generation of consumers for their products before it’s too late.

Elaborating on the grace period that is available to industries that include consumer audio, Pew Research also estimates that Boomers still control over 70% of the disposable income in America.

In a paper called “Gray is the new Black: Baby Boomers Still Outspend Millennials”, Visa finds that over the immediate future older consumers will continue to be the leading spenders, but looking further ahead,  Gen X and Millennials will remain valuable demographics for not only their current spending but the potential they provide as future consumers (and the possibility of developing brand loyalties).

The one thing that should be considered is that even though there is a “grace period opportunity,” manufacturers should not rely on Boomers to buy their products and services.

According to a blog posted by Skulocal.com, Boomers are like other demographics—they value convenience and the ability to purchase products from online retailers. This blog finds that unlike younger demographics, Boomers are less likely to be influenced by discount promotions, and on average spend $203 per transaction online for pharmacy and healthcare products, household goods and appliances, wine, books and cosmetics.

Convenience is King for Younger Consumers

Arguably the greatest feat the consumer audio industry needs to accomplish in order to meet any long-term goal is to grab some attention away from activities such as gaming and streaming video.

Noah Kaplan, president of Leon Speakers, says the first thing the audio community needs to do is to simply listen to what the public wants from their audio components.

Kaplan contends the industry needs to ask questions such as, “when do you listen to music?” He says people listen in their cars, when they exercise, when the work, and a myriad of other ways.  Kaplan estimates that every generation will answer these questions differently, but still feels the questions need to be asked, and from that point integrators can start to outline the benefits of having headphones, whole-house audio systems and stereo systems.

Kaplan says the next most important item consumers will emphasize is price. After price, Kaplan comments that usability and convenience as highly appreciated features.

“Is an in-ear bud about design? I like people that have taken form and design to drive the market forward. For most people the design is the fashion side. It’s a good thing when design drives the consumer market, and the user experience drives the design.” 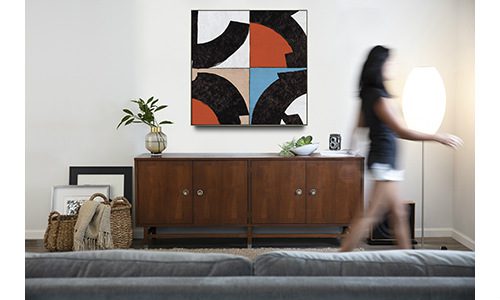 Helping his dealers to better communicate the design and performance of his company’s product line, Kaplan says Leon Speakers has developed content that can be used by dealers to immerse users into modern art and artists.

“The first step was to setup video where you could be a fan. Where you could just appreciate music in an intimate setting. That is the Leon Loft Series. We’ve spent a lot of money to capture and distributing content,” he explains.

“The next half of the strategy starts with cultural questions. We’ve created a series of videos that walks people through our culture. We have a non-jargon rule. We have one video about art and craftsmanship. We are also creating packaged messages that dealers can use. We are not trying to say how to do things. The industry got caught up in ohms, SKUs and things people don’t think about. That’s why we don’t get caught up in jargon.”

Leveraging the Fundamental Need for Robust Networks to Sell AV

Since the way people listen to audio has shifted more towards streaming, the network now serves as the backbone of audio entertainment.

In fact, Pandora Advertising/Pandora Brands’ “The 2020 Definitive Guide to Audio” says that Americans spend an average of four hours per day listening to audio.

Adding up the use of mobile devices (26%) and connected home products (17%), which include smart speakers and streaming devices such as Apple TVs and Roku products, more than 40% of listening devices require Internet connectivity.

One important caveat in these numbers that Pandora Advertising/Pandora Brands emphasizes is that the use of mobile devices as audio source components increases with younger consumers. With people under the age of 55 mobile devices are the top audio source for users according to the streaming service’s study.

Hagai Feiner, founder and CEO of Access Networks, says that not long ago integrators leaned on home theaters to sell AV gear, now, people realize how important the network has become in not only delivering a “wow factor,” but how fundamentally necessary a robust network is in order to realize the complete functionality of home control systems, security systems and AV systems.

Starting client conversations by explaining the importance of the network he says helps drive home the point that regardless of the system, audio, video, control and other systems will struggle to meet their performance expectations.

“It’s important to inform your clients that you can put in the nicest audio system in the world, but with a shoddy network the experience is going to be poor,” emphasizes Feiner.

“Talk about how the network affects mission critical parts of a home. A poor network struggles to handle layers of control and streaming, so the user experience is affected.”

Relating the importance of the network specifically to audio, Feiner advises that integrators shouldn’t get technical or throw name brands around during these conversations.

Like most conversations related to audio systems, Feiner recommends that integrators demonstrate the capabilities of their audio systems to show how a robust network promotes high levels of performance.

“A presentation without a demonstration is just a conversation. You can talk about audio all day, but at the end of the day, you need to have them listen, he advises.

“If you don’t have a showroom, build a kit and take it with you to clients’ homes.”

Feiner says that these days most networks come equipped for capacity. He says what separates a basic system from more advanced, higher performance systems is the amount of latency within these systems, which comes from the Internet provider. What companies like Access Networks do is minimize latency issues, which, for example, can help reduce the time from when a song is chosen until it starts to play to ensure a better user experience.

Another important consideration according to Feiner, is that dealers need to understand the products they place on a network in order to set proper client expectations.

“Understand the products you work with and their nuances. Sometimes a new product is not fully baked when they get deployed. So, it’s important to stay on top of product introductions and react,” Feiner notes.

“It’s really important to assemble the system beforehand and test it out, in-house, before you go to client’s house. Make sure things will work as intended before you get onsite — whenever possible.”

Providing more information on Pandora’s finding relating to mobile devices, newly released research from the high-resolution audio company MQA states that 75% of consumers use smartphones to listen to music.

Moreover, the research stresses that the number rises dramatically to reach the plateau of 95% among users 16- to 24-years-old.

Ken Forsythe, director of Market development for MQA, says the reason for these overwhelming numbers is simple: The cell phone is the most important piece of electronics in peoples’ lives.

“A smartphone is central to most peoples’ daily consumption of music and video content, news sources and social interactions,” says Forsythe.

“Integrators should keep this in mind when they’re designing smart-home systems and integrate with no only with ‘home-based’ products, but also handsets. For example, do the keypads in the home that are displaying and controlling the music services share the same UI [user interface] as a smartphone?”

Forsythe notes that since many integration firms already setup their clients’ smartphones as control devices, it will become expected that integrators utilize these same products as sources within audio systems.

Forsythe also recommends that if integrators are uncomfortable utilizing smart devices as source components, they could combine phones and tablets with a range of audio components to improve the listener experience.

“AudioQuest’s Dragonfly range of portable DACs [digital to analog converters] incorporated the first implementation of MQA rendering technology, making them an affordable complement to MQA-ready streaming services. MQA is also working with a number of portable DAC and dongle products due to hit the market in Q4 [fourth quarter],” he points out.

Regardless of whether businesses like the current trends within the audio market, there is no sensible excuse for ignoring what is happening.

The common theme coming from Millennials and Gen Z is that both demographics are consuming audio much differently than Gen X and Baby Boomers.

However, the aforementioned generations do share one common thread: They consider audio quality to be an important factor when purchasing components.

This fact is good news for integrators, and the news gets even better. A study released in September of 2018 from the Consumer Technology Association (CTA) called “Millennial and Gen Z Generations: Audio Product Ownership and Content Consumption Report” states that 88% of these two demographics listen to audio for great lengths of time, including listening periods at home.

What all of this comes down is that while the market slowly shifts towards Gen X, Millennials, and later Gen Z having most of the buying power, manufacturers and integrators will have to accept the fact that younger consumers are using their phones as source components and expect more user friendly feature from their products and systems. Manufacturers and integrators will also have to accept that unless they provide value with their audio products and systems they may see declining sales.

There is hope for the future of the market, but it hinges on whether the audio industry can prove the value of their products and systems by showing these components deliver sound quality, user-friendliness, and industrial designs that complement Millennial and Gen Z lifestyles.