Bluesound’s Pulse 2i soundbar combines smooth, well-detailed sound with a conservative, but contemporary industrial design. Through this combination, the latest Bluesound products provide homeowners with a solution that sounds as good as it looks.
Robert Archer 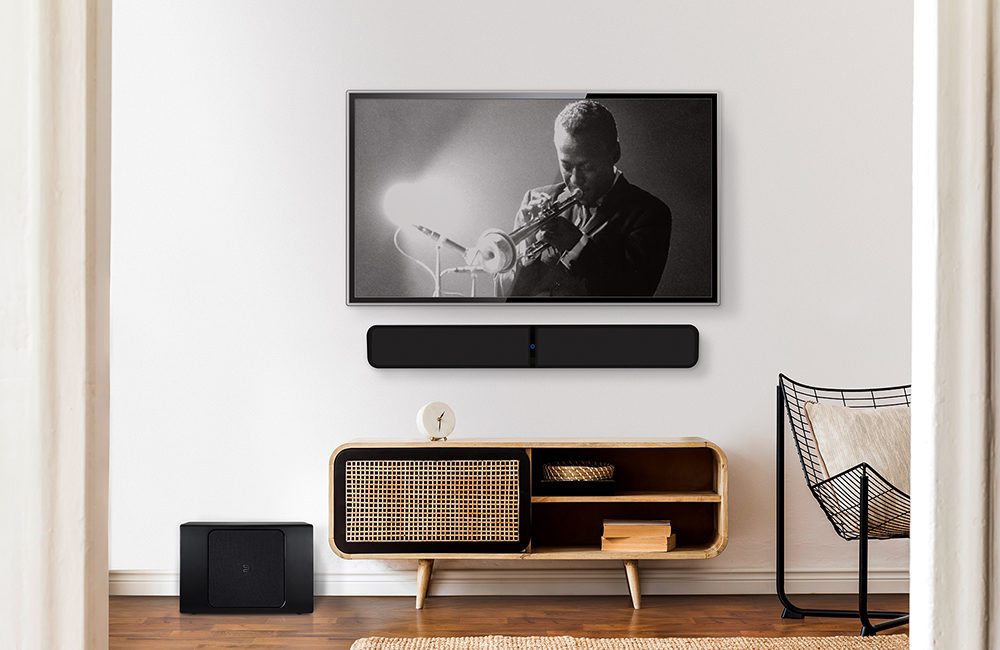 The Bluesound Pulse Soundbar 2i and optional Pulse Sub+ are capable of integrating into a range of home environments without sacrificing convenience and sound quality. 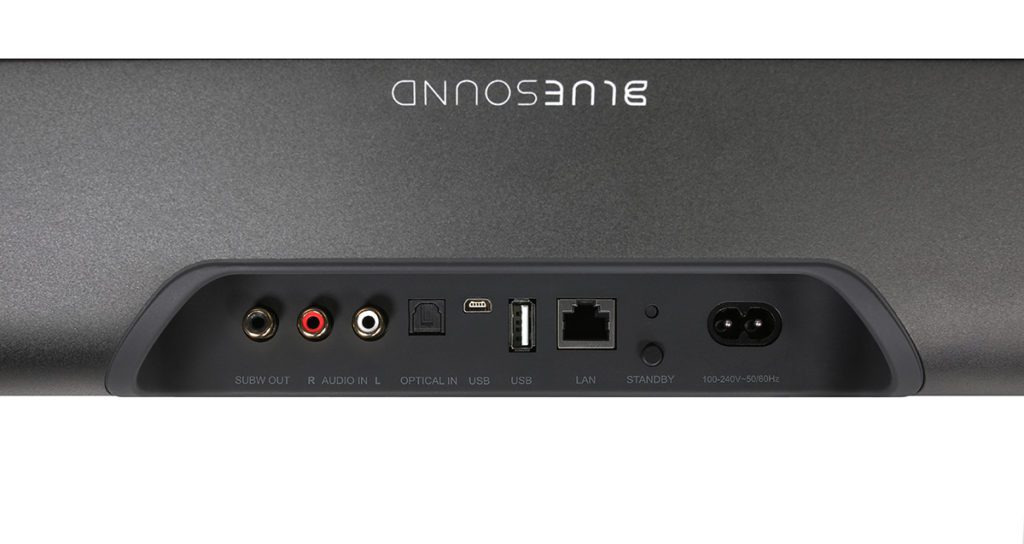 Not long ago Bluesound introduced its Pulse Soundbar 2i. Shortly afterward the company followed up with the introduction of the companion Pulse Sub+ subwoofer.

This combination of a soundbar and subwoofer represent a proven way to produce a full, more involving audio experience for music and AV content that includes broadcast and streaming video.

In the case of Bluesound, the company is steeped in engineering through the expertise of people such as Paul Barton of PSB Speakers, so the idea of designing a high performing soundbar and complementary subwoofer is not a far reach for the Canadian whole-house audio company.

Sending me the products, I set up the 2.1 system as the foundation of a living room system that included several source components and a 4K TV.

The two pieces arrived in two boxes at my house. After unpacking the soundbar and sub I started with setup of the soundbar.

The Pulse Soundbar 2i’s rear panel provides a choice of HDMI and optical inputs, and an analog input. Other connection options on the rear panel include a subwoofer output, a USB input and a LAN connection.

Tying all of this together is Bluesound’s proprietary BluOS operating system.

BluOS is a whole-house audio platform that supports high-resolution audio and it offers a choice of streaming services, including Spotify, TIDAL, Deezer, TuneIn, Amazon Music HD, Napster and Qobuz.

Moving onto the Pulse Sub+, this product is designed to work with other Bluesound components.

Like other BluOS products, the subwoofer is set up via the companion BluOS Controller App, and it can be installed without wired connections.

Circling back to the setup of the soundbar and subwoofer.

I setup the components by using BluOS app. I started with the soundbar and afterwards I finished the system setup with the subwoofer.

Getting started is simple. Download the BluOS app, which in my case I downloaded the iOS version. Next, after unpacking the products I began with the Pulse 2i soundbar. Placing the soundbar next to my television I pulled out the Pulse Soundbar 2i’s little kickstand feet and inserted the two legs, which go on either end of the soundbar into their respective rear-panel slots.

The first connection I did was run an optical cable from my Vizio 43-inch 4K TV to the soundbar. Then I plugged in power and grabbed my phone to fire up the app. 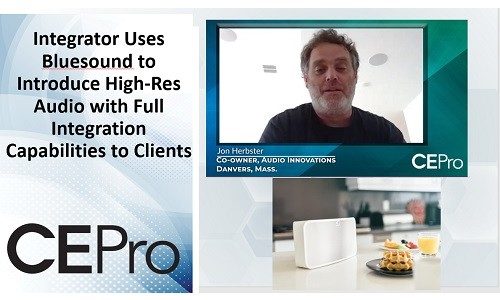 The next step was to set up my streaming services. In my case, I set up TIDAL, Pandora and TuneIn among others. Since the optical input was connected to my TV, I drilled down into the app to rename the input “TV” and I named the soundbar.

Before moving onto the subwoofer, I went into the soundbar’s settings to tweak its performance. A few of the tweaks I made include setting its dispersion to “wider;” I set the equalization to “movie,” and I selected the subwoofer option, which I am guessing sets the crossover between the sub and soundbar.

Setting up the subwoofer was a similar experience, including placing it on my network, naming the sub and setting its level.

Getting both components up and running, including their configuration should take less than a half-hour.

Before getting into some detail, I think the Pulse Soundbar 2i and Pulse Sub+ combination will price out towards the higher end of the soundbar market right now. The fact that it only delivers a 2.1 soundfield may also be a point against the products too considering many soundbars offer some sort of quasi-immersive audio experience.

However, once you listen to how smooth and integrated the combination is, I think no one will ever notice the difference between the Bluesound’s stereo image and the DSP-powered immersive soundfield some of those inexpensive soundbars create. More importantly, any concerns over the price differences between the Bluesound components and mass-market products will quickly be erased.

My first few listening sessions with the soundbar were done with music. I used sources that included TIDAL and Apple AirPlay 2 where I could use my Apple Music account.

With music I was impressed with the wide soundstage the soundbar threw. I think at reasonable listening levels the Bluesound products can fill small- to medium-sized rooms with good, concise, involving sound.

A vast majority of my time with the Bluesound Pulse Soundbar 2i and Pulse Sub+ were with all of that said was done with video content and sources that include broadcast via Dish Network, and streaming sources such as Disney+, Netflix and HBO Max.

When I evaluate soundbars my top priority is dialog reproduction.

Watching shows such as “His Dark Materials” on HBO Max and broadcast shows such as “Big Sky” I found that male and female voices were articulate without having to turn up the volume to hear softly spoken passages. Voices are reproduced with a crispness that makes them sharp and intelligible, but not shrill either.

I also think it’s important to go back to an earlier point I made about the integration of the subwoofer with the soundbar.

I can’t think of another soundbar and subwoofer combination that’s more well-integrated than these Bluesound products. This combination won’t provide the loud, one-note bass that many of its competing systems provide, which I think has generally created a negative perception of soundbar/subwoofer systems in the mass market.

Breaking this “sonic stereotype” what the Bluesound products do create is a well-balanced, detailed listening experience that includes a nice level of upper- and mid-bass information.

Without the subwoofer the soundbar still delivers many of these attributes but having the subwoofer as part of the package does fill in that missing component that makes music involving and AV content more engaging.

Describing the sound quality of the combination without using audiophile nerd terms, I think the Pulse Soundbar 2i and Pulse Sub+ delivers an eloquent listening experience with both music and AV content that people will enjoy.

I’ll emphasize, these Bluesound products are not a mass-market, big-box soundbar experience. They are refined products that deliver refined sound regardless of setup, room environment and listening content.

Add to that an app that is easy to learn, and I think that Bluesound is upping the ante in terms of compact system looks, performance and usability.

Boiling all of this down. I found the Bluesound Pulse Soundbar 2i and companion Pulse Sub+ are upscale solutions that are worthy of anyone’s attention that wants something more from their AV system than the usual soundbar that people think of when shopping for an improved audio experience for their apartments, condos, and secondary living spaces.