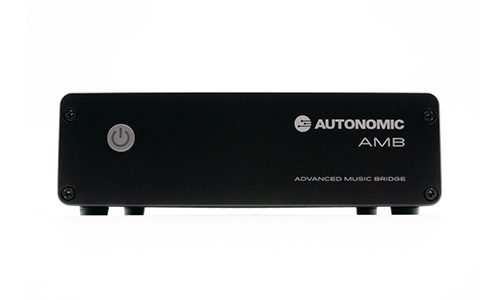 For the first time since gaining its independence, Autonomic has announced its Advanced Music Bridge (AMB) solution that is designed to enhance and augment existing eSeries streamers to the new Mirage OS 7.0 platform.

Some of the enhancements the AMB delivers include the ability to provide two streams of Apple Music as well as Calm Radio support, Josh.ai integration, HD TuneIn Radio, and expansion of local library track capacity from approximately 40,000 tracks to more than 200,000 tracks, the company says.

“Many of these features were going to have to wait for our next-generation hardware platform because we knew we couldn’t deliver all of them on our existing platform. Instead of delaying much sought-after functionality and requiring dealers to replace their entire system to get these features, the team came up with the idea of introducing new hardware and software capabilities via an add-on device,” says Michael de Nigris, CEO and co-founder, Autonomic.

“This creative approach enhances the value and longevity of our customers’ existing investment in our products while reducing our reliance on highly scarce audio chips. By leveraging hardware already deployed in the field, dealers will be able to provide this solution to a far greater number of projects. The final benefit is that we will be able to maintain healthy stock levels of MMS’s and Amplifiers for new installations.”

The company explains the installation process for the AMB is simple: Integrators have to connect power and Ethernet to the component, then they will need to perform a firmware update to existing eSeries products in the system.

Autonomic points out the AMB does not need to be physically connected with the on-site Autonomic gear as they communicate over the local network. Once the firmware update and connections are complete, the system will incorporate the new functionality of Mirage OS 7.0.

Outlining some of the benefits of the new operating system Autonomic states it enables homeowners to add multiple Apple Music accounts to any eSeries MMS, and the ability to play two simultaneous streams of Apple Music.

Autonomic notes that if more than two streams are needed multiple AMBs can be added to a system. Mirage OS 7 integration of Apple Music enables browsing and the playback of curated Apple content, including “Top Charts” and “For You,” as well as homeowners’ personal music libraries with access to playlists, albums, and songs. Apple Music is also included when users perform global searches using the Autonomic TuneBridge.

Other features the new Mirage OS 7.0 offers users and integrators include Josh.ai integration. Autonomic says that its streamers and amplifiers are configurable as Josh.ai input sources and output zones throughout a whole-house audio system. This functionality allows homeowners to incorporate music in their voice commands such as, “O.k. Josh, draw the living room shades, listen to Black Sabbath in the den and dining room, and set the volume to 25%.”

Additionally, the new OS provides options for Calm Radio which Autonomic describes as a service that helps to improve sleep and reduce stress. Simultaneous streams of Calm Radio are also supported using one free or premium account on any eSeries MMS. The new Mirage OS7 and AMB product augment the TuneIn Radio experience with support for live MLB, NFL, NHL, motorsports, college sports; news from major networks without the interruption of ads.

Moreover, for homeowners who do not need the advanced features of the AMB, Autonomic has also released OS 6.4 which includes support for the Josh.ai integration, and it provides the necessary stability and performance enhancements to existing eSeries systems free of charge without the requirement of the AMB.

Helping integrators to make the migration over to the Mirage OS 7.0 platform, Autonomic is stressing that its trade-in program includes a number of dealer-friendly options such as bundled purchase discounts, loyalty rewards, eco-minded recycling, and a demo program for new dealers.