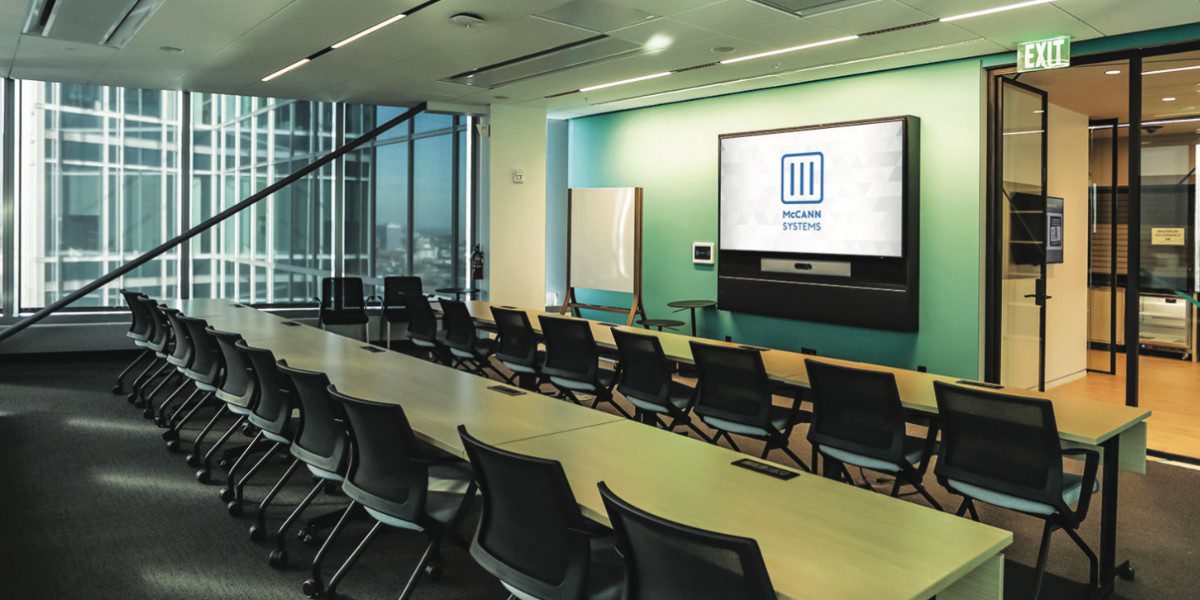 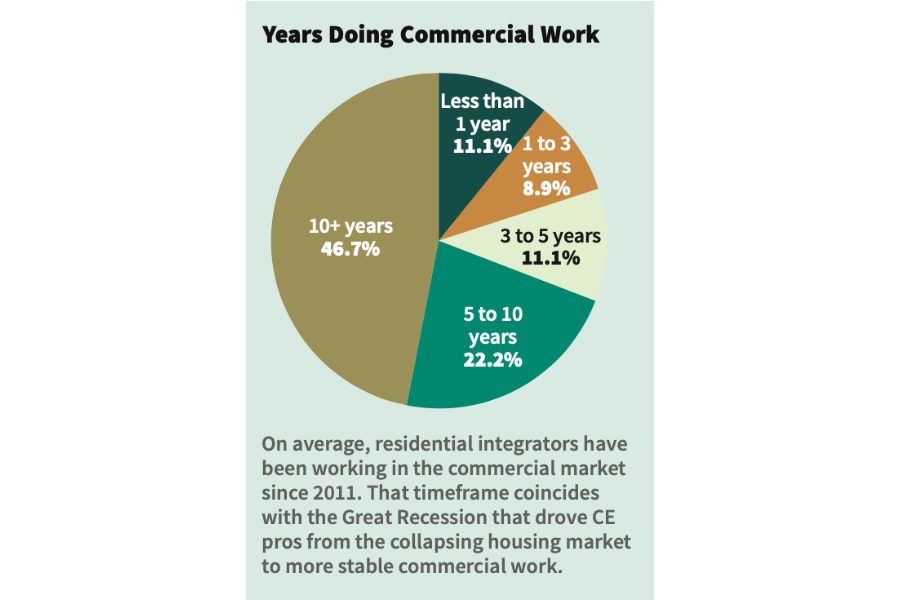 The trend of residential custom installation companies delving into light commercial work continues to grow, though the coronavirus COVID-19 pandemic appears to have slowed the pace in 2020. The trend first picked up steam during the Great Recession that started in 2008 with the collapse
of the housing market.

Indeed, according to the new CE Pro Resimercial Deep Dive Study, integrators report on average they have been doing commercial work for just over eight years, coinciding with the recession. The trend has continued to today, where, according to Steven Rissi, director of technical training at CEDIA, 95% of residential custom integration companies now report they do some level of commercial projects.

But the blurring of the lines between commercial and residential work is not just about integrators doing light commercial jobs anymore. With the advent of increasing work-from-home and distance-learning needs due to COVID-19, more integrators find themselves bringing commercial-grade equipment into the home. Thus, the term “resimercial” is now in vogue.

So what exactly does “resimercial” mean? CE Pro defines it as:

With those definitions as a backdrop, CE Pro undertook its first-ever Resimercial Deep Dive Study in August 2020 to help integrators gauge some of the nuances of resimercial work including project sizes, lead time, points of contact at the end-user level, margins, manhours, equipment and more. The results are an eye-opening look at this commercial/residential space.

For example, a residential integrator who wants to work in commercial environments needs to be prepared to respond to spec, possibly engage in a competitive bid process, be able to work flexible off-hours, have a large enough crew to complete a project quickly, have bonding and insurance, among many other requirements.

Digging into the Data

Much of the move by residential integrators into commercial work was simply being driven by demand, prior to the pandemic. Manufacturers such as Nortek Security & Control, Metra Home Theater Group, Crestron, URC, RTI and others have particularly focused on this crossover opportunity.

Interestingly, 96% of integrators report installing equipment that was originally designed as a residential solution on a commercial project. However, just one in five CE pros admit they do that on a regular basis; half of dealers say they “sometimes” do it; and 24% of integrators say it is “rare” when they use residential-grade equipment on commercial jobs.

According to the study, home offices are by far the most common area of resimercial work, followed by corporate offices, bars/clubs/restaurants, MDU common areas, and then healthcare. Beyond installing strong networks for home offices, audio distribution systems are the most in-demand category of equipment installed in commercial locations, followed by audio conferencing systems and unified communication/collaboration systems. Also, dealers are embracing AV-over-IP as the primary means of distributing media in resimercial work. 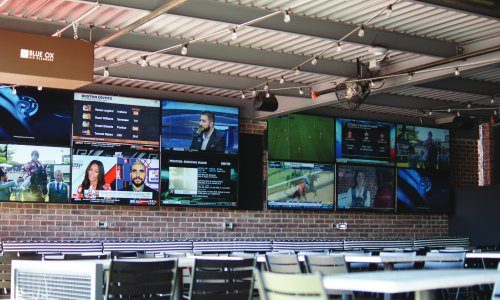 The study shows that the typical resimercial project is smaller by comparison to the jobs done by large commercial AV integration companies that focus on large venues and facilities like schools, stadiums, concert halls, amusement parks or big corporate campuses with multiple boardrooms. The median price paid for a resimercial project done by a CE pro is $17,242, according to the data. That price point shows that the typical projects are smaller in nature than what would normally be associated with a commercial project.

General contractors, business owners and facilities directors are the three most common points of contact for resimercial projects, with referrals most often coming out of residential work. That could be from the owner of a business who had work done in his or her home and decided to engage with the integrator at his or her place or business, or simply a referral from a residential client to another person who is a business owner or decision-maker.

The lead time from first encounter to “breaking ground” on a resimercial project averages between three and four months. That timeframe is a bit more prolonged than the average commercial project; however, nearly half (48%) of resimercial projects are started within two months of first contact, according to the Deep Dive data. A typical resimercial installation requires 40 manhours of work. So that could be one technician on the job for one full week, or two technicians for 20 hours each.

Many commercial AV integrators are having success selling service agreements, especially for large corporate boardroom installations, in which the agreement tracks product usage and by whom. That data helps end users determine the most used products (i.e., audio conferencing equipment vs. teleconferencing, displays, projectors) in the boardroom and therefore can influence future room designs and equipment purchases. For integrators that are able to sell service agreements, the median price is $70 per month.

Interestingly, dealers report that resimercial projects are not as profitable as pure residential jobs. Survey respondents report earning an average of 23.6% profit on resimercial work. That compares less favorably to the average 31% profit dealers earn on residential jobs, according to the CE Pro 2020 State of the Industry report. But the difference makes sense, especially since residential jobs might entail expensive loudspeakers, projectors, big-screen displays or other luxury products that often carry higher margins.

Not surprisingly, maintaining cash flow is the biggest challenge. Tight installation windows and competitive bidding are also hurdles dealers say they encounter on resimercial work. On the positive side, dealers say they like the larger projects and not having to deal with the “picky homeowners” that often come with residential jobs.

Another related trend to keep an eye on is the move by commercial integrators into resimercial home office work driven by the pandemic. According to Jon Robbins, executive director at the Home Technology Specialists of America (HTSA), the buying group’s members are already reporting seeing commercial AV integrators delving into the residential space.

“It’s already happening,” says Robbins. “There are commercial AV guys that are eating up some of this crazy [residential] business.” He says many clients don’t really have a firm understanding of what it takes to get a project completed properly.

“All they want to do is get a project done. They want somebody to come in, get it done and have everything work when they leave,” Robbins says. “The [end-user clients] don’t really understand the various skillset. I think there are probably [commercial AV companies] out there already grabbing up some of this residential business.”