Neck strain, reduction in image quality, and heat problems are common objections integrators face from clients about mounting a TV over a fireplace. They are not true!
By Spencer Greenwald 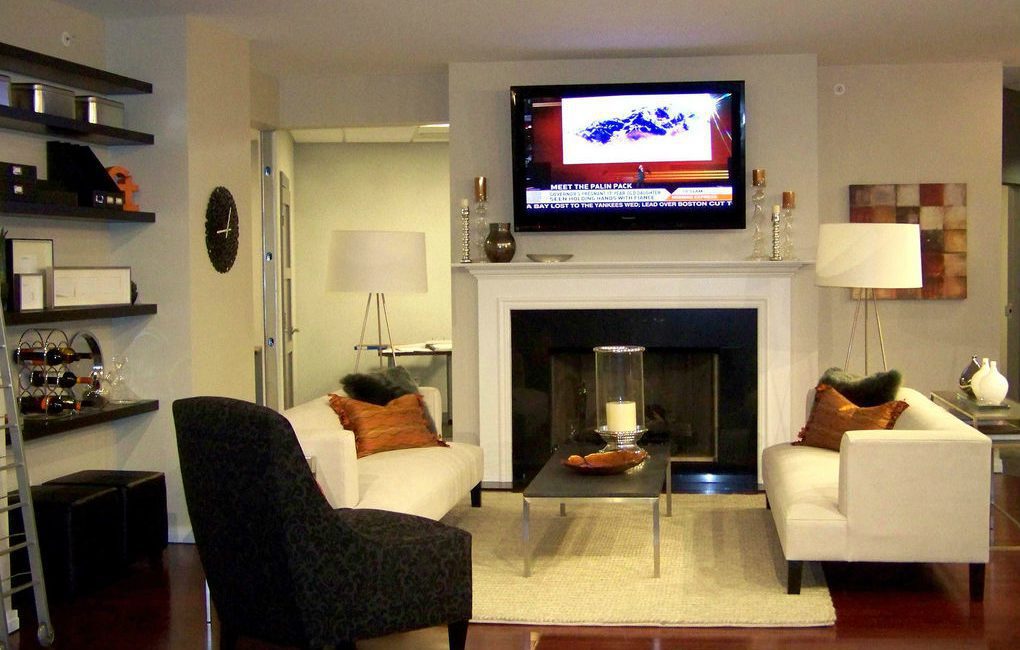 New full-motion mounts and motorized mounts can assuage your customers' concerns about placing a flat panel TV over the fireplace.

The dilemma of mounting a TV over a fireplace reminds me of a “Twilight Zone” episode in which a spaceship carrying highly intelligent beings lands on a distant planet where a group of colonists had crashed 30 years before. When one of the colonists breaks his wrist, the resident physician begins to apply a splint to the man’s arm. But before he gets halfway through the process, one of the advanced visitors waves a wand and the man’s wrist is immediately healed.

The old doctor protests in earnest, claiming that the only way to heal a broken arm is the tried-and-true splint method. But, after examining the man’s arm, he had to admit: the wand had worked. There was no cogent argument he could make to claim otherwise.

The reasons generally cited for not mounting a TV over a fireplace, while valid at one time, no longer hold water.

There is a valuable lesson here: conventional wisdom – doing things the way you’ve always done them — is fine, until something better comes along. And there is no better illustration of this adage than with TV mounts.

This is a critical point because placing a TV above a fireplace has always been – and remains – an extremely popular mounting option. So, once you understand the reasons that this can be done cost-effectively, efficiently, and safely, you’ll instantly become a more valuable resource to customers.

In many cases, there’s no other logical place for homeowners or installers to put a television other than over a fireplace. But why is that such a logical place to put it?

The fireplace is really a focal point in the room. Many rooms are designed so that the sofas are facing the fireplace. Regardless, there are a number of myths in place about why this is bad for the electronic equipment, or even the viewer.

The reasons often cited against mounting over fireplaces are abundant, but they boil down to three main issues:

The myth here is that putting the TV above the fireplace puts the viewing angle above eye level. This requires the viewer to crane his or her neck to see the television, which can result in all kinds of health problems. According to the Prairie Spine Institute, “If the TV is…mounted too high, people tend to look up. This could potentially lead to muscular imbalances, and stiffness, particularly of the neck.”

For those who try to avoid the sore-neck issue by using their eyes to look up instead of lifting their head, the problem of dry eyes comes into play, as their eyes are forced to open wider. And the eye muscles get tired from working too hard as well. Other sources speak of damage to your deep-neck stabilizers and other scary-sounding medical concerns.

Check out the slideshow to see some cool mounting solutions and get helpful tips!

No one can argue that putting the TV above the fireplace creates a horrible viewing angle. That’s why full-motion mounts – especially pulldown mounts with vertical movement capability – were developed. Full-motion mounts offer a variety of capabilities that enhance the TV-viewing experience.

The key words here are “full motion.” There are a number of mounts that offer tilt capability, as well as articulation. While both are useful, it is the vertical movement which allows the viewer to mount their TV above the fireplace, pull it down to eye level when they want to watch it, then easily move it back when they’re finished. No neck craning, no health problems, no doctor’s appointments.

The best picture quality is going to come from watching your TV at eye level, according to Lee Marc, CEO of MantelMount.

“If you set your TV to the perfect height, your eyes would be parallel to roughly the center of your TV, but that’s in a perfect world if there’s no fireplace in the way,” Marc says. “The good rule of thumb for the viewing distance with a fireplace or in any other situation is to take the size of your TV and divide by 0.55 — so a 55-inch TV would mean that the viewer should be about 100 inches, or eight feet, away from the screen.”

This myth centers around how many video experts claim that in addition to the neck-craning problem, there is the quality of the picture to consider. If the viewer is not looking straight at the screen (as they likely would with a TV mounted above a fireplace), the result can be a washed-out image, as the viewer is only seeing a fraction of the light being produced by the TV. So, after paying what was likely a sizable chunk of cash for their new 65-inch, 4K Ultra-HD flat screen, they are not likely to want to make this kind of compromise.

With a modern, full-motion TV wall mount, picture quality is no longer a concern. Mounts with vertical capability allow the viewer to bring the TV down to eye level. Since they are now looking straight at the screen, the problem of washed-out picture quality is eliminated. Even for mounts without vertical movement, they can at least be tilted downward to minimize loss of resolution.

According to some electronics experts, having an open fire going while your TV is above the mantel can potentially damage sensitive electronic parts. There is actually considerable disagreement over this issue; even those who agree can’t necessarily agree on what temperature is considered too high and how long a TV must be exposed to it before damage occurs.

The fact is, as long as the TV is above the mantel, the mantel will act as a shield from the rising heat. However, the situation changes when you have a full-motion mount with vertical movement that allows the viewer to put the TV right out in front of the fire. Look for solutions that include heat alerts.

Marc says just about all TVs are generally rated to handle 120 degrees of heat without any damage.

“If you’re dealing with one of these humongous, wood-burning fireplaces and it throws off a ton of heat, it may not be the best idea to put your TV over that fireplace. However, there’s usually a mantel in the way, and the mantel blocks a lot of that heat from going to the TV. Most newer homes these days have gas fireplaces which don’t put off a lot of heat at all.”

“Years ago, people were very concerned with smoke and soot affecting the wires. In the whole time I’ve been in this business, I haven’t heard of one case where that actually happened.”

Myth #4: Cables Will Distract from the Design of the Fireplace Area

Nobody wants ugly cables dangling everywhere, especially in situations where the homeowner is using their TV as an entertainment center. Maybe they’ve got wiring in their wall that goes to to their stereo in another location.

The cable mess doesn’t have to happen in the first place! Some will use what’s called a cable routing box to divert cables. These small boxes are about the size of an electrical switch, and they allow integrators to attach a conduit to either end and route the cables through the back of the wall.

The frustrating aspect to all of this is that despite the introduction of full-motion pull down TV mounts, the number of articles claiming that a TV should never be placed above a fireplace continue to proliferate.

With the possible exception of an aesthetics issue, a high-quality, full-motion mount renders all of the objections moot. Should you decide to mount a TV above a fireplace – or high on any wall, even without a fireplace – remember that the vast majority of articles strongly recommending against it are not taking full-motion mounts into consideration.

Now, armed with this information, the next time you have a customer who is considering mounting their TV above their fireplace but is concerned by articles stating it’s a bad idea, you will be able to explain that it is a fine idea, and won’t be forced to find an alternative location. You can tell them that putting their TV above their fireplace is a fine idea, and you know just the way they can do it.

Click here to see examples of TVs mounted above fireplaces.

Spencer Greenwald is the vice president of marketing and e-commerce at MantelMount.