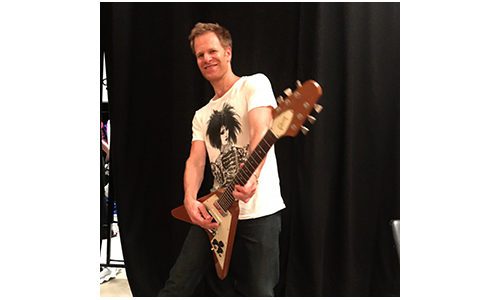 In 2004, guitarist Dom Brown was an up-and-comer, having gotten his start playing gigs around Twickenham, England. He’d found a groove performing for TV with artists such as Elton John and Lionel Richie and backing up popular English bands like Go West and Curiosity Killed the Cat. Then Duran Duran called, asking if Brown could join the band just two days later and stand in for lead guitarist Andy Taylor.

“People had started to hear me playing and word got around,” he recalls.

As the COVID-19 pandemic began loosening its grip, Brown, who has collaborated with artists and producers including Mark Ronson, Justin Timberlake and Liam Gallagher, was in his London studio putting the finishing touches on a new solo album, “In My Bones.” As he finished mixing, everything went through a miniDSP SHD processor with Dirac Live room correction system.

“It has really helped me in my mix process because I can hear things more clearly. I’m not getting any colorization from the room and I can get a truer representation of what’s going down. It’s massively helpful.”

Touring with Duran Duran, Brown knew that fans expected certain songs to sound as close to the original as possible. But he also relished the opportunities, often during guitar solos, to lend his own style.

“For those 16 bars or so, I’m able to do pretty much what I want within a framework,” explains Brown.

“It’s me, I’m not copying someone else, and that’s important to a lot of players.”

The same goes for work in the studio, where Brown has collaborated on three Duran Duran albums, along with his other projects.

“The best sessions are the ones where they say, ‘Just be yourself and feel it how you want to feel it,'” he notes.

Brown prefers to use as much analog equipment as possible — in his studio he owns Universal Audio mic preamps and 1176 compressors, Neve 1073 and API preamps, and more — to get the sound he’s looking for.

“If you record everything through those devices, you’re capturing that lovely analog warmth before you hit the digital world,” Brown emphasizes.

Once in that digital world, Dom Brown’s newest equipment is his miniDSP SHD processor with Dirac Live, which is a room correction solution that minimizes a room’s impact on sound, bringing out the best of the audio system without requiring treatments.

According to Dirac, its Dirac Live solution improves studio acoustics and enhances sound accuracy through its patented impulse response correction technology, correcting for both the magnitude and phase of the entire sound system including the room itself – resulting in more transparent, balanced sound, tighter bass, improved staging, and enhanced clarity.

“My room’s been treated, but I wanted to get it absolutely as close to perfect as I could,” adds Brown.

“A friend introduced me to Dirac and I’m loving it. Everything I listen to — all my referencing, everything — goes through that processor. And even though my room’s pretty good, you still notice the difference considerably. It adds clarity in the lower end and balances out some of the mids. With Dirac and my ATC monitors, I have a great room for mixing.”