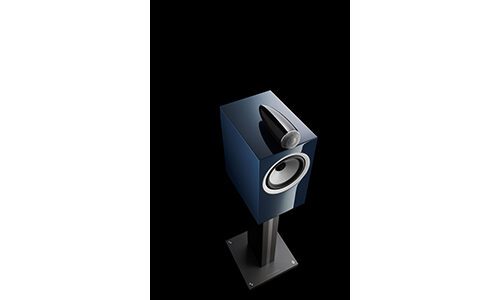 As with the existing Signature models, both Midnight Blue Metallic loudspeakers feature specially treated and upgraded bypass capacitors sourced from Mundorf, larger heatsinking and, in the case of the 702, an upgraded low-frequency capacitor on the bass section of the crossover. According to Bowers & Wilkins, in tandem with the benefits both models enjoy as a result of their Tweeter-on-Top configuration, these upgrades improve the already remarkable resolution, openness and spatial retrieval on offer, lending them an even-more polished, refined and involving sound.

The front portion is a 30-micron aluminium dome that has been stiffened by a PVD (Physical Vapor Deposition) coating of carbon. The second section is a 300-micron carbon ring that has been profiled to match the form of the main dome. This is then bonded to the inner face of the structure. The outcome is exceptional stiffness and resistance to distortion without undue mass and a first break-up point of 47kHz.

Bowers & Wilkins also points out the speakers’ Continuum cone midrange drivers were first seen in the 800 Series Diamond. The Continuum cone’s design is based on the concept of optimised and controlled flexibility.

Additionally, the 700 Series speakers’ Continuum cone midrange drivers were first seen in the 800 Series Diamond. The Continuum cone’s design is based on the concept of optimised and controlled flexibility. This helps the cone to avoid the abrupt transition from pistonic to break-up mode behaviour that drastically impairs the openness and neutrality of a conventional drive unit. Continuum is a woven composite that gives highly controlled break-up, for a more transparent and detailed midrange.