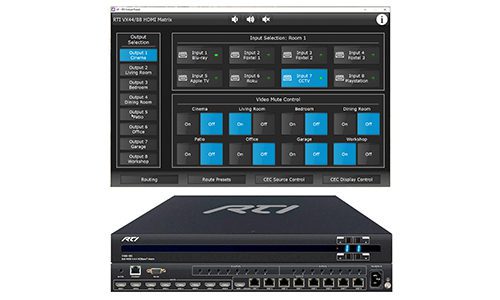 RTI states the products utilize the HDBaseT format and they provide HDMI 2.0 compatibility.

The company explains the VX44 and VX88 products provide a respective four and eight HDMI inputs, which can be independently routed to four or eight HDBaseT outputs. Additionally, the products provide simultaneous HDBaseT/HDMI outputs, and the devices will provide video down conversion for compatibility with lower resolution televisions.

RTI adds the VX44 and VX88 matrix switches can be used with the VXR70-18G to distribute AV signals throughout a home or business.

The 4×4 system ships as a kit with matrix switchers and four of the receivers. The systems are capable of distributing HDCP 2.2 compliant content, as well as audio formats such as Dolby Atmos, Dolby TrueHD and DTS-HD Master Audio.