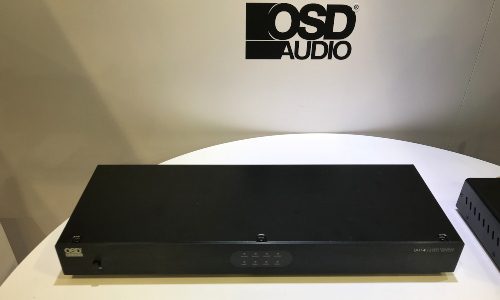 The OSD Black SRT4 streaming module includes a 24-bit DAC that delivers DVD-level sound quality to popular streaming platforms, such as Spotify, Napster, and Tidal as well as a multitude of streaming internet radio stations such as iHeartRadio and TuneIn.

OSD Black, an Audio Gear Group brand, is launching the SRT series of preamp streaming modules that combine Wi-Fi and Bluetooth (ST1 only) with the audio experience that traditional amps, receivers, and speakers provide. The OSD Black SRT1 is a single-zone wireless streaming pre-amplifier, while the SRT4 is a four-zone wireless device, and both connect to existing whole house audio systems or two-channel setups. The company showed the modules at CEDIA Expo 2019 in Denver.

Stand-alone devices, the SRT 1 and SRT 4 include a 24-bit DAC that delivers DVD-level sound quality to streaming platforms, such as Spotify, Napster, and Tidal as well as a streaming Internet radio stations such as iHeartRadio and TuneIn. The SRT1 also features a direct analog 3.5mm line-level input and TF (SD content) card slot input. Outputs include signal level aux and optical.

The SRT4 features a unique Universal Bus with dual RCA stereo right/left inputs, a single optical input available for all four zones, and a direct USB (content) input for each zone. It also features an analog RCA stereo (right/left) output and digital optical fiber output for each zone as well.  All input sources are controlled by the free OSD Play App for smartphones or tablets.

“Wi-Fi streaming is great, but audiophiles know that streaming comes at the cost of sound quality,” says Bryan Strachota, AGG’s National Brand Manager. “Our SRT Series bypasses the tiny Digital-to-Analog Converters in smartphones and tablets and uses its own, more robust converter, so you’ll hear the sonic nuances so sorely missed with standard streaming.”

In addition to the OSD Play App, there is a slim-line IR remote control included with both the SRT1 and SRT4 for direct access to sources as well as volume up and down, play/pause and previous/advance buttons.  A LAN connection available on both SRT1/SRT4 allows for direct connection to a Wi-Fi router for Automatic Configuring or a WPS button for wireless connection and manual configuration. Lastly, there is an RS485 connector on the SRT4 for controlling multiple devices and for interfacing with an external control system.

According to Strachota, the SRT1 can be paired with the SRT4 to take streaming audio to other areas of your home by connecting additional preamp SRT1/amplifier combinations to create more sources and zone options.

“It’s a beautiful and simple way to stream audio from room to room, and it’s all controlled from your smartphone, tablet or laptop,” he notes.

Features of the SRT1 and SRT4 Wi-Fi Streaming Modules include: