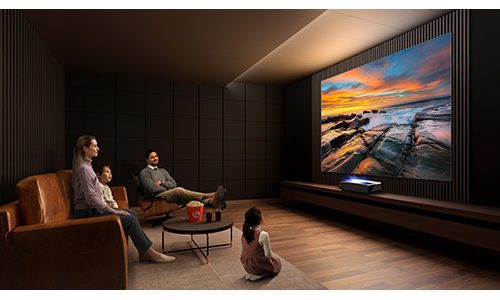 Hisense has aggressively come into the short-throw home projection market and its new L5F Laser Cinema 4K projector underscores the company’s commitment to the category.

The newest Laser Cinema product from the company incorporates the Android TV smart platform to provide homeowners with a choice of streaming services that include Netflix, Disney+, Prime Video and HBO Max.

Hisense points out the L5F system delivers a 120-inch image that is paired with an ambient light-rejecting (ALR) screen, and it also offers Google Assistant voice assistant capabilities.

According to the company, the L5F Laser Cinema 4K Projector produces a sharp, detailed image through its use of its X-FUSION blue laser light source and Texas Instruments’ DLP 4K chip technologies. This combination the company says, enables the projector to produce up to 2,700 lumens of brightness.

Additionally, Hisense says the L5F exceeds the Rec. 709 color standard, and it delivers up to 83% of the DCI-P3 color gamut. The projector is also compatible with the HDR10 and HLG (hybrid log gamma) high dynamic range (HDR) formats.

Other features built into the L5 Laser Cinema short-throw 4K projector include built-in speakers that are powered by 30-watt amplifiers and dbx-TV audio processing.