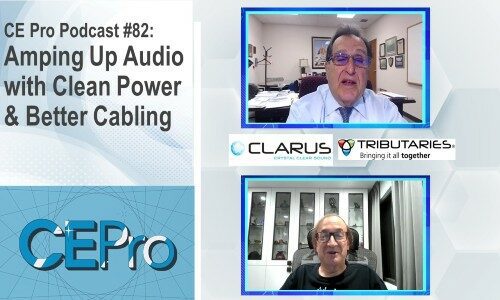 It’s something I’ve heard echoed over the years and acclaimed audio cable and power designer Jay Victor underscored when asked about the first thing listeners looking to optimize their audio systems should address: the power.

With his work implemented by veteran cable/power manufacturer Tributaries Cable and sister brand Clarus, which combined run the gamut on types and budgets of products, Victor and Joe Perfito, president of those Gordon J. Gow company brands, were ideal to talk audiophile upgrades on this week’s CE Pro Podcast.

“Obviously, most power is crap,” Victor says bluntly. “The power coming out of your wall has all sorts of noise on it, and really, that’s where your audio signal is coming from. If you start out with rubbish, you’re going to get rubbish coming out.”

Victor, who joined the CE Pro Podcast long-distance from Taiwan, joined forces with Perfito a while back. Tributaries sought to expand from being known as more of a home theater cabling brand, and Clarus was introduced as a reference hi-fi brand. Toward that effort, Victor mentioned how some of his designs and patents could be put to use.

“We looked at the abstracts of the patents and I said, ‘Wow, this is just really interesting ideas,’ so at that point we started working together and we became a licensee for Jay’s designs and his patents and started making Clarus cables,” Perfito recalls. “Once I heard those cables and the quality and sound of them, I asked Jay to redesign our entire Tributaries line so they were all from the same design, the same voice.” 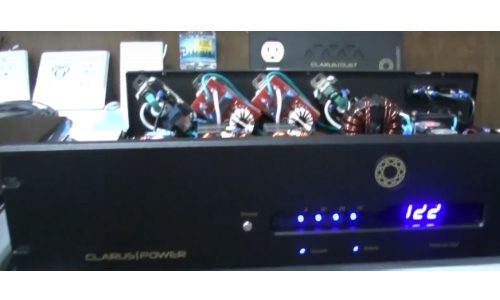 Dealers can form cohesive audio infrastructures that also include power conditioners (I recently reviewed the impressive Clarus Concerto power conditioner and CODA USB DAC solutions) as a solid foundation, as Victor continued to explain on the podcast.

“I don’t care how good the power supply is – a lot of the pundits will say, ‘Oh, a well-designed power supply and amplifier is going to filter all that out,’ and it’s just not true,” he says. “Power amplifiers are not designed to filter out all the rubbish, the EMI, the RFI on your powerline. I think it’s one of the most important things really, and you’d be nuts not to have power conditioning.”

Victor, whose background includes tenure at Monster, adds that his reference system has as much in the way of power conditioning as audio components!

Now that’s an endorsement. Audiophiles, music fans and custom integrators will learn much more from Victor and Perfito as they distill some of the technology behind the product engineering and how upgrades will present themselves in improved hi-fi systems – and how dealers can demo that for clients.