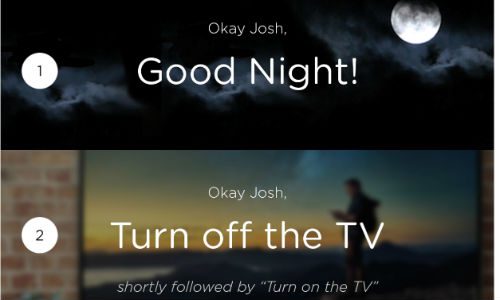 The "Good night" scene and "Turn off the TV" request were the most used voice commands of 2019, according to Josh.ai.
Article:
Control | Interfaces/Devices | Lighting | News | Products | Whole-House Systems
January 6, 2020

How do your customers use voice control?

Do they stick to simple commands? Do you program “scenes” with multiple activities triggered by a command, just like integrators do for touchscreens or remote controls?

Custom industry-centric voice command provider Josh.ai has compiled a list of what it found to be the most common commands uttered in 2019.

The mix within the top 10 offers a glimpse of how smart home owners are actually using voice control for their daily activities … and by that token, how the commands are being programmed by professional installers with integrated technologies.

(Note, Josh does not include any references like “survey based on 286 homeowners” and naturally is treading delicately around its users’ confidentiality here. The company included this disclaimer in releasing the results: Josh.ai is very privacy focused and clients can choose to have their commands auto-erased or not saved at all, so this is only a subset of commands. Most homes are in the US, with a decent mix of age and gender.)

In descending order from most common, here are the top voice commands that followed the “Okay Josh,” wake phrase. In several instances, Josh also noted the related command but listed the more popular option:

Voice Control More of a ‘Turn Off’

So a few takeaways going on here. For one, as Josh notes, homeowners tend to use their voice commands more for turning off things than turning them on. Despite not including specific statistics in terms of the frequency of its top 10 commands, Josh does state the “Good night” command was given about 30% more often than “Good morning” in 2019.

Additionally, the company noticed with related commands for lights and shades, for instance, those automated technologies were vocally powered down more often than on.

For custom integrators, the fact that shades and lights are both prominent on the list bodes well for pitching these categories as “must haves” for homeowners interested in relying on voice for automated tech.

Does that mean people are perhaps still more accustomed to tapping a keypad or flicking a switch first thing in the morning than speaking a command? Or perhaps the “Good night” scene is just more all-encompassing for integrators to program, addressing more house-wide functionality than necessary out of a “Good morning” scene, which might only trigger tech in a few rooms? 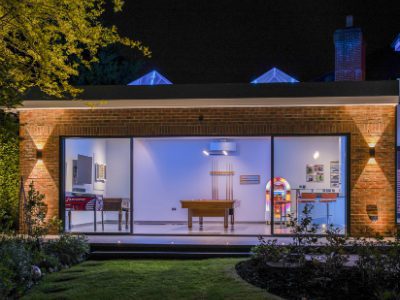 Josh points out that in terms of individual rooms, the only room-specific command to crack the top 10 comes in the kitchen. That seems to fall in line as the kitchen becomes more of a hub for today’s activities and is an easy candidate for hands-free controls while people grab food from the fridge (maybe late at night) or need more illumination over certain spots like the oven area or island, for instance.

And while Josh also notes that it’s “no surprise but the most popular video request was for Netflix, followed by AppleTV,” perhaps it is surprising that no music service commands made the top 10. Have you ever been in someone’s house where family members seem to only use their smart speakers to shout out “play the Beatles” or other favorite artist or song?

One reason could be that it’s another way integrators are using their multiroom audio savvy to include a favorite streaming service or specific Pandora station, for example, within the “Good morning” or “I’m home” command. Music is also a natural integration partner for the “Turn on the lights” scene. Or it could just be that “Listen to Spotify” was #11.

Whatever the case, the biggest takeaway from the list is that Josh users do rely on professional integration to make the “magic” of voice commands happen, and that consumers should understand how pros can elevate basic voice assistant devices from what’s purchased off the shelf.

“Good night” and “Good morning” would carry little weight without being tied into an automation system in which lights, security, AV, climate and other technologies could receive and respond to such commands.

How do you sell voice control technology to your customers? What are their popular commands?