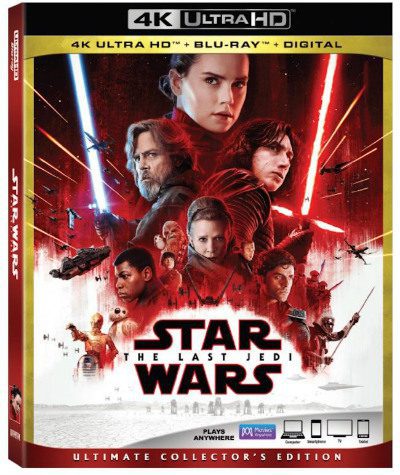 Star Wars: The Last Jedi will be available in a digital version on March 13, and in the Blu-ray and UltraHD Blu-ray formats on March 27.
Article:
Audio/Video | News
February 20, 2018

Disney Home Video Entertainment has announced the 152-minute PG-13 rated Star Wars: The Last Jedi will be available in a digital format on March 13, and on Blu-ray and UltraHD 4K Blu-ray disc on March 27.

Some of the bonus content included with the upcoming Disney Home Video release include The Director and the Jedi that brings viewers behind the scenes of the latest movie in the Star Wars world with writer and director Rian Johnson. The bonus content features audio commentary and more.

The home video release will also include Lighting the Spark: Creating the Space Battle. This bonus content gives owners a look at the movie's epic space battle, including the sounds behind the action and its visual effects.

The Snoke and Mirrors featurette looks at how Disney created the movie's evil villain, and its Showdown on Crait showcases how the movie developed its final battle sequences.

Moreover, depending on the retailer, the home video release of Star Wars: The Last Jedi will also offer individual packaging and other options.

Here is a partial list of specifications for the DVD, Blu-ray and UltraHD Blu-ray widescreen releases: