Using its experience on every level of film and video production, the 2018 Sony 4K UHD projectors provide a choice of Hollywood-approved options.
Robert Archer
The new 2018 range of Sony projectors will range in cost from $5,000 to $35,000. 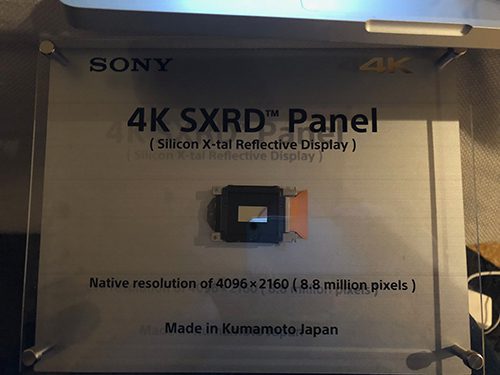 In a detailed press event prior to the start of CEDIA Expo 2018, Sony explained the five points of emphasis it employs to outline the performance of its projectors. The results can be found in the new Sony 4K UHD projectors, which were just introduced during the annual trade event.

During the presentation, Sony said it has been designing, engineering and building projectors since 1972, and unlike some of its competitors, every aspect of its projectors are built in-house to control every level of quality.

“By assembling and inspecting through a strict process, we maintain a high quality.”

To best illustrate the key performance attributes it wants from its projectors, during its presentation Sony employs a star-shaped diagram showing the five points of performance.

Elaborating on color gradation in specific, Floyd says that it’s a difficult challenge for manufacturers to match the brightness levels of displays. Because of this challenge, he says tone mapping becomes an important component to projector performance.

Drawing from its professional background, the company references the Sony BVM-X300 post-production monitor to establish accurate color and HDR levels.

“We are striving to maintain this, the director’s intent, and the X300 represents that as closely as possible, and it’s nothing to do with metadata,” notes Floyd.

“In projectors, there aren’t as much brightness as a display and that is why tone mapping is important … Sony projectors can faithfully reproduce color tones … it’s not magic, we are not trying to cheat or anything.”

A Closer Look at the 2018 Sony 4K UHD Projectors

Here's a quick rundown of the three latest projectors Sony has on offer: