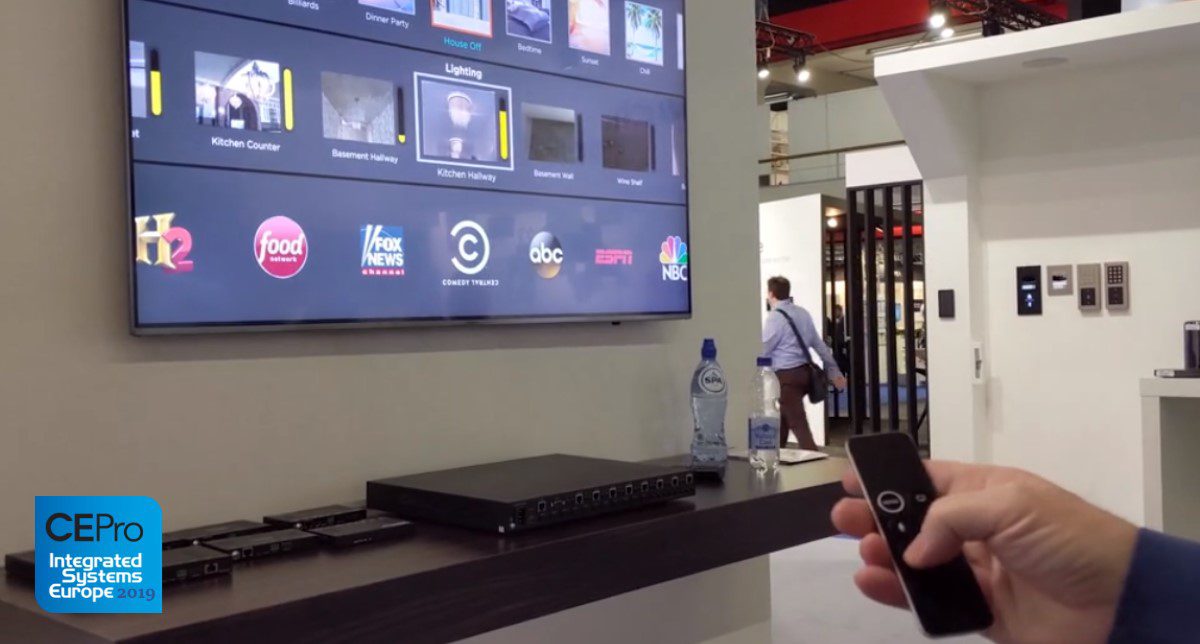 Correction: This particular demo does not illustrate Savant's forthcoming two-way IP control of Apple TV. That particular implementation has been demonstrated elsewhere (see it here). We apologize for the mischaracterization. But … do enjoy this demo of Savant control via OSD through Apple TV.

All you need to control a Savant home automation system on the big screen is an Apple TV box and an itty bitty companion remote. At ISE 2019, Savant demonstrated two-way integration between the two systems, showing how anything in the Savant smart-home ecosytem could be navigated and controlled through an on-screen display (OSD) via Apple.

The solution was made possible by a long-waited API for two-way IP integration that Apple announced last year at WWDC 2018. Smart-home developers have been controlling the multimedia box via IR commands and IP hacks over the years, but the solutions have been inelegant and unsupported. (see correction above)

The Apple announcement of two-way integration last year was a very big deal. Control4, Crestron and Savant were reported as the the first three home-automation partners at the time. In addition to Savant, Crestron demonstrated its own Apple TV integration at ISE, but offered a different implementation. As far as we know, Savant is the first with an OSD implementation.

As for Savant, the company introduced its dealers to the new Apple TV solution just a few weeks prior to ISE during the company's 2019 Integrator Summit. Several dealers told CE Pro they were wowed by the demo.

ISE 2019 was the first time the rest of the world got to enjoy the spectacle. In the demo, Savant international sales director Trevor de Maat pulled up the Savant services on the TV using the Apple remote, and navigated through a three-level UI featuring home-automation scenes at the top, connected devices and rooms in the middle, and favorite channels along the bottom.

The integration is rich. de Matt showed how the user could navigate to a set of lights in a particular room, and then use the touchpad on the Apple TV remote to dim or brighten the load … just from the thumbnail view on the TV OSD. On the thumbnail image, you can see how the lights were responding … in real time.

Don't care to scroll around? Simply press and hold the microphone button on the remote and tell Siri what you want.