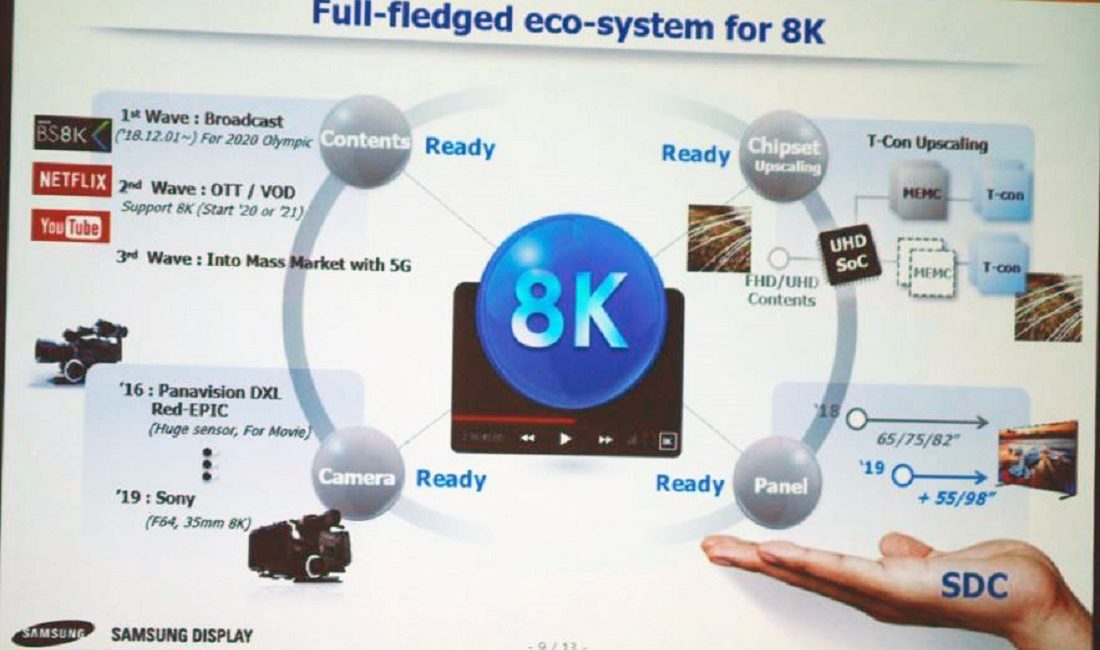 At the 8K Display Summit held by the 8K Association, Samsung outlined its complete ecosystem. 8K streaming could launch as soon as 2020, which is expected to drive sales.

The 8K ecosystem is moving ahead but facing multiple challenges, from skepticism among consumers and content creators to the need for more efficient video-compression codecs, fatter broadband pipes, and faster Wi-Fi networks to deliver native 8K content to consumers in a big way.

That’s the word from the 8K Display Summit, held in New York City on June 11 by the 8K Association to promote 8K to content creators, pay-TV and streaming providers, and others.

The association admits that consumers, many content-creation professionals, and service providers must still be convinced that 8K delivers a significant enhancement to picture quality over 4K and that it’s practical to deliver native 8K to homes via the Internet, satellite TV and cable TV.

To challenge the myth that an 8K images’ 33.2 million pixels are too densely packed for the eye to resolve, presenters stressed that 8K TVs will reproduce “hyper-realistic” images readily appreciated at typical viewing distances at home. With 8K, viewers perceive higher brightness and contrast, sharper edges, greater depth of field, and greater tonality, all of which combine to create a 3D-like effect, they said.

The association reiterated its mission to educate consumers, the content community and service providers, and as part of that effort, executive director Chris Chinnock said the association would “reach out” to retailers to conduct education campaigns, “probably later this year,” to supplement education initiatives through its web site and social media.

More than 100 attendees also learned of other developments moving 8K ahead, including:

Attendees were also told that streaming services will take the lead in bringing native 8K content to U.S. homes and that 8K streaming could launch as soon as 2020 or 2021, though it wasn’t clear if that timeline includes the U.S.

To drive 8K TV sales in the interim, TV makers are turning to increasingly sophisticated algorithms in 8K TVs to upscale SD, HD and 4K UHD content to 8K resolution. The new algorithms are “incredible,” said the 8K Association’s Chinnock.

All Samsung 8K TVs, a Samsung executive noted, use machine learning to sharpen edges, create texture, and reduce video noise and other artifacts such as banding.

In the meantime, to encourage 8K acceptance, everyone from content creators to consumers must be convinced that 8K makes a difference at typical viewing distances, presenters said.

To aid in that effort, one researcher presented the results of a study in which Korean consumers said they saw visible improvements in 8K images and videos over their 4K counterparts on separate 65-inch TVs positioned side by side. A total of 120 people viewed the TVs at a distance of 9 feet in dark rooms that simulated nighttime viewing conditions. 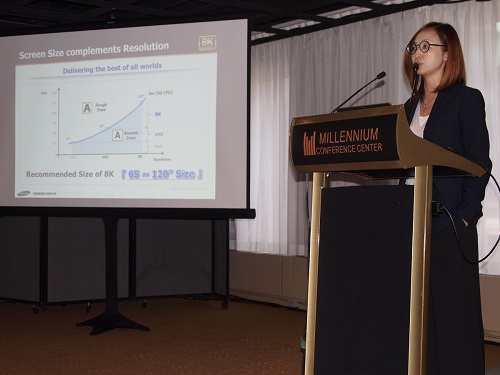 Each TV delivered 500 nits of peak brightness. All observers had 20/20 vision and normal color vision, explained YungKyung Park, associate professor of the College of Art & Design at Ewha Womens University in Seoul.

8K images are “hyper-realistic,” creating an “illusion” of higher brightness, higher black-and-white and color contrast, and sharper edges, all of which capture an object’s 3D information, Park continued. Viewers perceive an “illusion of depth” that can’t be measured by instruments, she added.

In his evaluations, video-services consultant Florian Friedrich of FF Pictures found 8K “makes pixels disappear as much as possible” along with digital artifacts such as flickering. That in turn creates an “analog look.”

With the level of detail in 8K pictures, Holland continued, consumers have “a reason to rewatch [a program] and discover new stuff in a frame.” In extra-wide shots, 8K makes even small people visible, and in nature shots, 8K delivers subtle textures.

To enjoy the enhancements, consumers don’t have to sit within 2 feet of a 65-inch screen or use binoculars from a more typical viewing distance, said Friedrich of FF Pictures in discounting common misperceptions. Good viewing positions can range from two to three times the height of a 16:9 8K screen, he said.

Viewing distances of 2X and 3X a screen’s height are still “good,” he said.

At least one benefit is visible even at farther distances: the elimination of aliasing (or flickering) of diagonal lines and diagonal edges, he said.

For the best 8K experience, native 8K content is recommended, but the industry faces several challenges making the content widely available to consumers, including the need for a more bandwidth-efficient video-compression codec to replace the widely used HEVC (High Efficiency Video Coding) codec, said Mauricio Alvarez-Mesa of Spin Digital, a maker of video encoders and players.

Because native 8K content packs four times the pixels of 4K content, a more efficient codec would encourage streaming services and pay-TV providers to offer 8K content through their existing pipes, he said.

For pay-TV providers, a single high-quality 8K HEVC program uses the same amount of bandwidth as four 4K channels or 16 HD channels, and if the service provider compresses the 8K signal a lot, “you lose the 8K effect,” Alvarez-Mesa said. 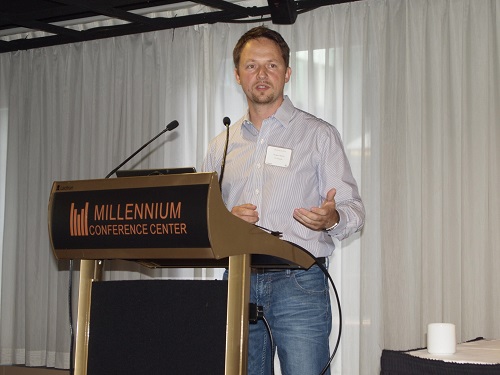 8K “makes pixels disappear as much as possible” along with digital artifacts such as flickering, creating an “analog look,” said video consultant Florian Friedrich of FF Pictures.

Nonetheless, HEVC is “right for now,” and the first 8K streaming services will use it, he said, but more efficient codecs such as VVC (Versatile Video Coding) are needed, he said.

HEVC is “right for now” because it is already widely adopted and available in most TVs, and 8K HEVC encoding tools are available for content creation, he explained.

VVC, on the other hand, is still in development with a targeted bandwidth efficiency that is 50% greater than HEVC’s efficiency with the same level of subjective quality. Although a final VVC standard is expected to be approved in July 2020, initial implementations aren’t expected to hit the 50% target, he noted.

For 8K streaming to take off in the U.S., households also need access to fatter broadband pipes and faster Wi-Fi networks than they have now, Alvarez-Mesa said. A single 8K HEVC stream requires a minimum average bit rate of 84Mbps, Alvarez-Mesa said after his public presentation.

In contrast, the average home-broadband download speed in the U.S. was 95.25Mbps in the second and third quarters of 2018, based on consumer-initiated tests using the Speedtest mobile-phone app, said the web site of network-testing company Ookla.

A more efficient codec is necessary for 8K streaming “if the cost of Internet bandwidth remains the same for the next few years,” Alvarez-Mesa said.

5G fixed-wireless services could be one solution, replacing wired broadband to the home and delivering download speeds of 200Mbps and up.