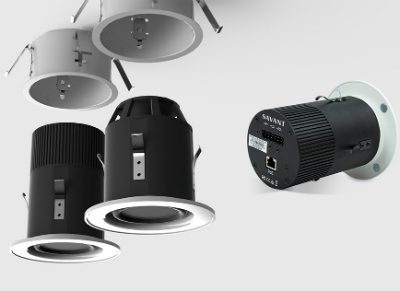 Savant, a company that develops a range of home technology systems including solutions for control, music, and A/V distribution, has introduced its Micro Aperture Powered Architectural Speakers.

The Savant Micro Aperture Powered Architectural Speakers utilize Power over Ethernet (PoE) to help streamline the delivery of power to speakers in a whole-house A/V system.

According to Savant, the use of an active, built-in amplifier also helps to maintain sound quality because the speaker and amp keep the audio signal in the digital domain throughout the entire signal chain.

Designed for a number of audio system installation scenarios, the new Savant speaker line provides integrators with a choice of three models.

Savant says each of the self-powered speakers can power up to three passive satellite speakers, and the active speaker will self-regulate the power based on the PoE type of switch or injector employed with the system.

Because each speaker is individually controlled and connected to the network, integrators or homeowners can easily switch room configurations, notes Savant.

“For example, the dining room speakers can play music during dinner, then become rear surround channels for a theater system at the touch of a button,” says Savant.

The company emphasizes that a key design element of the speakers are they are home-decor friendly.

The Micro Aperture Architectural Speakers mount flush to ceilings and are available with paintable round or square 4-inch grilles that complement the look of Savant/USAI Lighting's recessed fixture family of products.