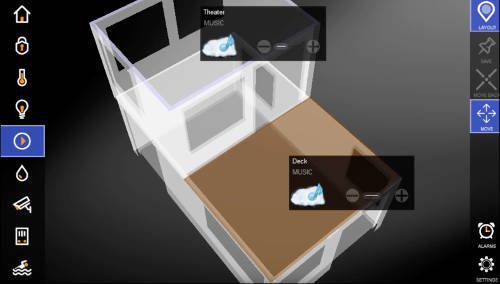 Despite having just landed from a redeye flight, Mike Jordan of Nortek Security & Control (NSC) took time to lay out the upcoming product roadmap for Elan and other NSC brands.

Speaking of the new Elan HR series remotes, Jordan says they fill in a gap for integrators that was previously missing.

“It's a remote that fits into the full capability of the system. It also allows us to provide a single-room solution that works for cost-conscious applications,” he says.

Meanwhile, at CES 2018 Elan announced the integration with the 2GIG GC3 security control panel. (2GIG is another NSC brand.) Jordan says the integration feeds well into the business models for custom integrators moving into security.

“We have a full line of IP cameras and NVRs for Elan.”
— Mike Jordan, NSC

“It really broadens our scope by introducing security to Elan dealers who really haven't been in the security world,” he says.

Jordan noted that the reaction to the new 3D mode in the Elan 8.2 software was very positive. “It is really cool. It ties in nicely with the GC3 panel. It gives dealers the ability to upload the actual drawings of the home and you start to control the home as you are living in it. It gives you a view of the living room or kitchen, and if you want to control what is in that room you actually physically press that. So when a motion sensor activates in a particular room, you see it on the display.”

The big news from Elan is the launch of its new security video surveillance line of cameras and NVRs. The line of new products is already been introduced to Elan's top dealers.

“We have a full line of IP cameras and NVRs for Elan,” he says. The cameras and NVRs will have the Elan Discovery feature that automatically locates and connects them to the control system. “A lot of the difficulty surround setting up IP camera is connecting them to the network,” says Jordan. These units simply plug into the network and then the integrator goes to the Elan Discovery tab and finds them and adds them. It is literally as simple as clicking a box.”

Lastly, Jordan offered some details about the new Niles and SpeakerCraft outdoor speaker lines. Available in late February/early March, the speakers are 70V, 8-ohm 4-inch and 6-inch satellites. Each lines also includes a 10-inch and 12-inch burial subwoofer. The speakers have solid brass screw fittings to the stake. Other features include larger cabinet volume and tap tightening.