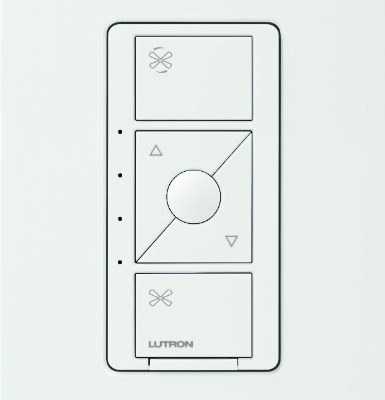 Originally announced during CES 2019 in Las Vegas, the new Lutron Caséta fan speed control is the latest addition to the company's smart lighting system. The fan speed control provides wireless access to ceiling fans from anywhere in a home, both outside and inside.

Controllable via the free Lutron app, the system is designed to be easy to install, program, and use.

“Caséta by Lutron has been a popular choice with some of the nation’s largest home builders,” he says. “The new ceiling fan control paired alongside Caséta dimmers, switches, and Pico remotes provides a clean, coordinated look throughout the home.”

Lutron anticipates setup to take approximately 15-minutes via its app. Additionally, the company says the product is easily integrated into Caséta scenes and schedules by using a combination of a Lutron smart bridge and its app.

A goodnight scene, for example, could now include lights turning off, shades lowering, and fans set to medium speed (one of four fan speeds available). Users can also set a favorite fan speed.

If customers are not keen on using Alexa or Google Assistant to control their fans, the new battery-powered fan Pico remote can be used to control the system inside the home. The fan Pico has a 30-foot range, an estimated 10-year battery life, and multiple mounting options.

Available in white, ivory, light almond, and black, the fan control is compatible with a single 1.5A ceiling fan and requires a neutral wire for installation.