LG's CineBeam HU85L 4K laser projector, debuting at CES 2019, can project 90-inch images from about 2 inches away from surface.

Last year, we called LG's new CineBeam projector a “doozy” because the company's first 4K laser projector was packed into a slender, portable tower that could be brought out for movie time and stowed when not in use.

At CES 2019, LG will introduce the second-generation Cinebeam (model HU85L), an ultra-short-throw projector that ditches the interesting form factor of Gen-1, but adds “AI” through LG's ThinQ voice-control technology:

According to the press release:

Viewers can control the operation of the projector by saying, “turn off projector after the movie has finished” or narrow the content to view by telling the projector to “play yoga videos on YouTube”. Viewers can access a list of movies starring their favorite actors then select the content by speaking into the included Magic Remote. The Magic Remote also recognizes gestures and features backlit buttons for easy navigation which turn on automatically when motion is detected. 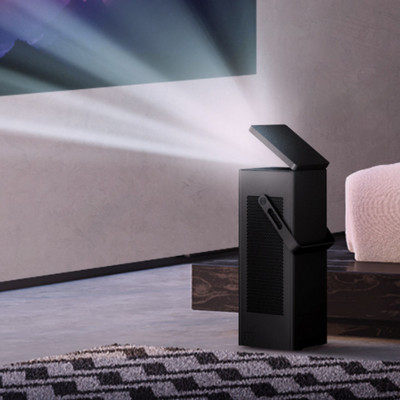 The new projector can be placed a little more than 2 inches from the wall to project a 90-inch diagonal image. Placed 7 inches away, the projector produces a120-inch image (“still bright,” the company says).

Although the product is pitched as a home-entertainment solution, the CineBeam comes out of LG's IT business division, headed by Jang Ik-hwan, and includes wireless provisions for keyboard and mouse control.