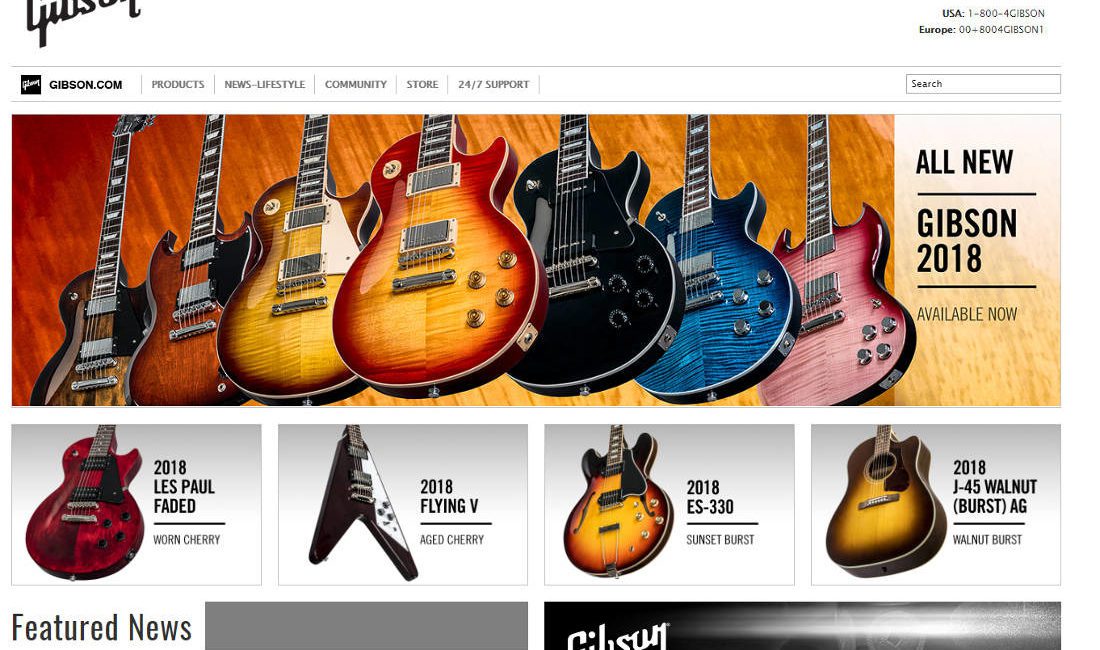 Gibson has already transferred global rights to the Onkyo/Integra brands to TCL, and it will focus going forward on just musical instruments.

Elvis and B.B. King might be spinning in their graves. After months of jockeying and speculation that included unloading the Onkyo brand, Gibson Brands Inc. officially announced it is “reorganizing around its core businesses” under a Chapter 11 bankruptcy agreement.

The company, which owns the renowned Gibson and Epiphone musical instrument brands and was founded in 1894, announced it will be re-focusing on the manufacturing of musical instruments and professional audio products. The “Restructuring Support Agreement” with holders of more than 69 percent of its stock clears the way for the continued financing and operations of the musical instruments business as well as a change of control in favor of those noteholders. Gibson also owns the KRK and Cerwin Vega studio monitor and loudspeaker brands.

Gibson's former Integra brand, which is a division of Onkyo, is the No. 1 home theater preamp/processor brand among CE Pro 100 integrators with a 38 percent marketshare. It is the No. 2 A/V receiver brand with a 44 percent market share.

Onkyo USA has been a private, wholly owned separate company since September 2017 led by CEO Jason Sausto. He took ownership of Onkyo USA after a decade in senior management positions with Onkyo Corporation, including president of Onkyo China and president of Pioneer Onkyo Marketing Asia.  A successful entrepreneur with an eye for disrupting industry stasis via technological innovation, Sausto was one of the founding members of the Booking.com group, which was sold to The Priceline Group for $133 million, as well as managing director, Asia for Red Herring, the global media conglomerate that was the bible of the Silicon Valley boom.

“[Gibson] will emerge from Chapter 11 with working capital financing, materially less debt, and a leaner and stronger musical instruments-focused platform that will allow the company and all of its employees, vendors, customers and other critical stakeholders to succeed,” says the official announcement.

Henry Juszkiewicz, chairman and CEO of Gibson Brands, and David Berryman, Gibson's president, will each continue with the company until new chief executives are brought onboard.

The company's Gibson Innovations business, which is largely outside of the U.S. and independent of the musical instruments business, will be wound down. The company was an innovator in multiroom audio years ago, introducing a chipset-based distribution system dubbed MaGIC. The company bought controlling interest in Onkyo back in 2012.

“Over the past 12 months, we have made substantial strides through an operational restructuring,” says Juszkiewicz.  “We have sold non-core brands, increased earnings, and reduced working capital demands. The decision to re-focus on our core business, musical instruments, combined with the significant support from our noteholders, we believe will assure the company's long-term stability and financial health.

“Importantly, this process will be virtually invisible to customers, all of whom can continue to rely on Gibson to provide unparalleled products and customer service.”

“The decision to re-focus on our core business — musical instruments — will assure the company's long-term stability.”
— Henry Juszkiewicz, Gibson Brands

In conjunction with the restructuring, the company received commitments for $135 million of debtor-in-possession financing from its existing noteholders. This financing, combined with cash generated from its operations, will provide the company with the liquidity necessary to maintain its operations in the ordinary course during its reorganization proceedings.

Gibson filed a series of motions that, pending court approval, will allow it to operate its business throughout the process in the ordinary course, and to provide support to critical business-partners including vendors, shippers, and suppliers. The first day motions will allow the company to continue to buy goods, manufacture and distribute its products to its customer base, and continue to honor its warranty policies in the ordinary course.

“We are grateful for the continued support from our employees, customers, dealers, partners and suppliers as we move through the restructuring process,” adds Juszkiewicz. “The Gibson name is synonymous with quality and today's actions will allow future generations to experience the unrivaled sound, design and craftsmanship that our employees put into each Gibson product.”