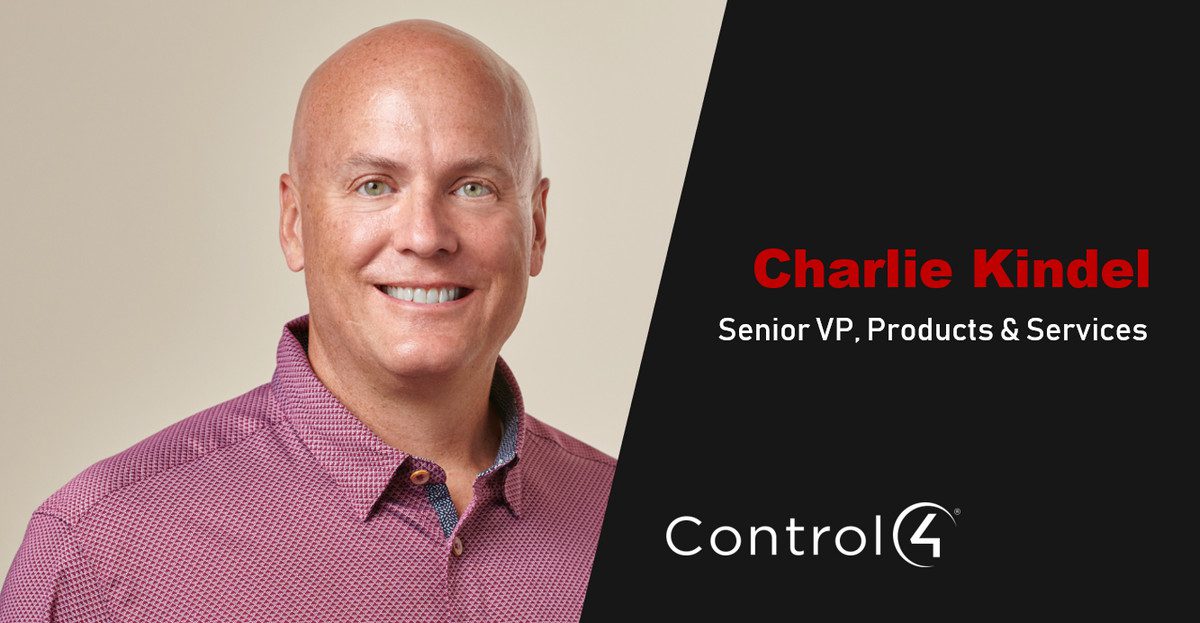 Control4 CEO Martin Plaehn wooed the heck out of Kindel after he left Amazon in April, naming him senior vice president, Products & Services.

Kindel replaces six-year Control4 veteran Eric Anderson, who announced earlier this year he would be retiring from the company.

“When Eric told us he was going to retire, I was thinking, ‘How am I going to find someone with that kind of passion and the skill to lead more than 240 engineers?’” says Plaehn in an interview with CE Pro.

“After 16 years I turned off most of the automation because I didn’t have time to do the refinement on it.”
— Charlie Kindel, Control4
on hiring a home-tech pro

And there Kindel was – “smart, thoughtful, a great listener and deep background” in the technologies, processes and experiences that matter most to Control4, Plaehn says.

“He makes winning products that deliver in excess of customer expectations,” Plaehn continues.

And, in what may be the understatement of the year, Plaehn lauds Kindel for leading a team that “delivered category winners at scale.”

But don’t think Kindel’s arrival signifies a move into the mass consumer market for Control4.

The company is still “maniacally focused” on being a premium provider of custom smart-home solutions installed by professionals, Plaehn tells CE Pro.

That mission is “unequivocal and unconflicted,” he says, “and it’s working for us.

The company has been growing at a 16% compound annual growth rate, and is consistently profitable with no debt and “more cash today than the day after the IPO,” Plaehn says.

The pro channel, the Control4 team, the technology ecosystem … “We trust it, we believe in it, we think the opportunity is super-durable,” the CEO says.

For his part, Kindel departed Amazon in April of this year in a most unscandalous way, writing in a goodbye blog, “The pace of the past 5 years has finally gotten to me and I simply need to catch my breath.”

Part of that breath-catching, beyond relaxing and goofing off, was to finally clean up the home-automation mess he had made in “pseudo-DIY” fashion over the last 16 years.

“I am hiring a CEDIA-level installer to completely refit my home automation system,” he wrote in his farewell missive.

He told me before today’s announcement, “It was super-clear to me that even though everything was there, it wasn’t going to come together for my family.”

While he might have had the will and skills to create a decent system in the first place, “after 16 years I turned off most of the automation because I didn’t have time to do the refinement on it.”

Even while he was creating and peddling DIY products like Amazon Echo, Kindel recognized the deficiencies of all-DIY solutions.

“The simple stuff works,” he says, “like when you open the sliding door, the lights turn on.”

But then what happens “when I know there’s a fox in the backyard and open the door and the lights turn on and scares it away?”

Home-tech pros recognize these use cases and can build them into home-control systems. They also can tackle the gamut of subsystems that none but the hardiest of geeks would attempt solo.

Cameras popping up on the TV was a big one for Kindel. Multiroom audio was another. The “system” used to work adequately enough at the Kindel household, but the family “didn’t use it much” because selecting zones and content became too onerous – less onerous than running around the house and adjusting speaker knobs, but taxing on anyone used to ordering pizza by voice.

He believes (rightly) that home automation is “now taking off for the masses because of voice.”

Lucky for Control4, Kindel not only understands voice control, but also “the masses,” and Control4 and its cohorts now must be poised for those masses.