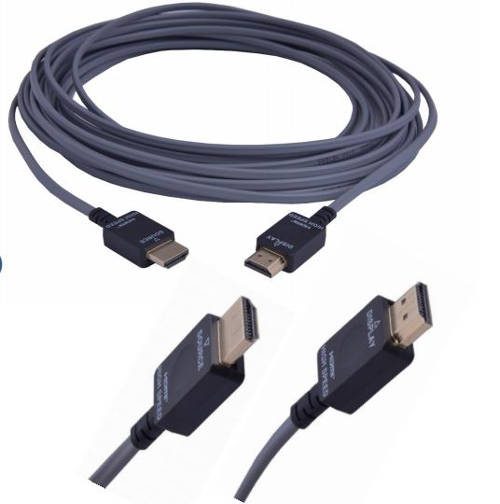 Integrators may not be familiar with the name Chromis Fiberoptics, but chances are they have already used one of the company’s cables.

The Warren, N.J.-based company has been an OEM supplier since 2012 for several major brands serving the custom integration and consumer markets, including a leading well-known Korea-based video company.

Originally spun out of AT&T’s Bell Labs, Chromis is now breaking out of the shadows with its own brand of active optical cables for both HDMI and DisplayPort targeting the residential and commercial A/V channels.

“We now want to bring greater awareness to our technology,” says Frank Graziano, CEO.  The technology he is referencing is the company’s patented Monolithic GigaPOF (Polymer Optical Fiber) Ribbon, which is made using a graded index polymer fiber instead of glass. The company’s patented process allows for extruded polymer optical fiber with a low graded index profile, providing high bandwidth and low attenuation.

In all, the company says it has invested more than $14 million to develop the GigaPOF technology, and it touts 15 patents in all.

“POF can be tied into a tight knot and will not break and will still transmit signals.”
— Dr. Whitney White, Chromis Fiberoptics

Certain types of polymer fiber are primarily used to carry lower bandwidth signals of 100Mbps or less in applications such as automobiles.  For clarification, traditional PMMA (acrylic) fiber is comprised of a core with fluorinated polymers as the cladding material. Those fibers are not used in active optical cables because of the low bandwidth. But since the late 1990s, according to Wikipedia, much higher performance graded-index (GI-POF) fiber based on amorphous fluoropolymer (polyperfluoro-butenylvinyl ether) has begun to appear in the marketplace. This is the high-bandwidth, low-attenuation graded-index POF made by Chromis and used in its active optical cables. It is completely different stuff compared to PMMA POF. Polymer optical fibers are typically manufactured using extrusion, in contrast to the method of pulling used for glass fibers.

Polymer fiber cannot carry signals as far as glass, with a general limitation of less than 100 meters. But that distance limitation is not usually a problem in residential applications that integrators commonly encounter, notes Graziano.

According to Dr. Whitney White, president and CTO, the polymer has one big advantage over glass fiber…its durability.

“GigaPOF can be tied into a tight knot and will not break and will still transmit signals,” he says. “Glass fiber can fracture and has a small bend radius.” Chromis touts its POF cable having a bend radius of 0.2 inches (5mm), and the ability to withstand a pull strength of more than 100 pounds.

Moreover, it says polymer is immune to static fatigue because the molecules can “creep past each other” over time, relaxing strain.

“Also GigaPOF is compatible with lots of products. One of our key differentiators is that we do lots of compatibility testing,” adds White.

Chromis is hitting the market with several different series of pre-terminated GigaPOF cables, including its:

Because the cables are pre-terminated, there is reduced labor in the field doing terminations.

But what about pulling an active cable through a tight conduit? Chromis’s HDMI connector is detachable, reducing the remaining connector to just 7.5mm. The company recommends installers use a pulling sock in the field.

Regarding cost, Graziano says Chromis will be competitive.

“There is always someone cheaper, especially with so many products from China, many of which get government subsidies. We are competitive with other high-end solutions and when you include reduced labor from not having to terminate in the field we are the same,” he says.

For integrators still debating the move to fiber from copper, Graziano says. “Copper is very limited at higher data rates unless it gets a lot fatter. Fiber is just a much better solution. Fiber will simplify an integrator’s life.”

The company is building out its distribution channel now for the custom installation market, having already engaged partners such as Eric Bodley’s Future Ready Solutions. Graziano says Chromis will use both reps and distributors, depending on the market.