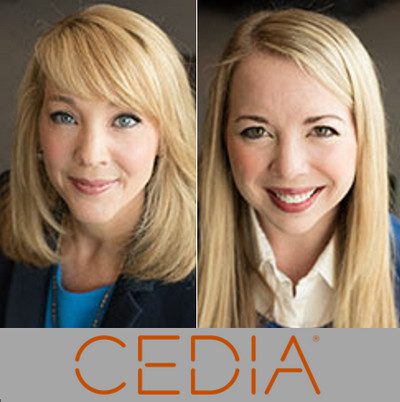 CEDIA has announced two strategic promtions to its management team. Cris Pyle has been named vice president, marketing and industry relations for the association, while Olivia Sellke has been named director of public relations and industry relations.
In her new role, Pyle will lead a key area outlined in CEDIA’s strategic plan — driving awareness among architects, builders and interior designers.
“As we looked at executing our strategic plan it became clear that many of the new initiatives for industry outreach were marketing and public relations based,” says Tabatha O’Connor, CEDIA president and CEO. “It made sense to have direction for these areas fall under one department to ensure that all priorities continue to be aligned.”
Pyle joined the CEDIA team in August of 2015 but she is no stranger to the industry having spent over 10 years earlier in her career overseeing marketing at Klipsch. During her time at CEDIA, she has been a valuable resource creating and guiding successful marketing and PR campaigns including the “I am CEDIA” campaign, the communications for the CEDIA strategic plan and global alignment, and CEDIA Expo campaigns leading to increases in overall attendance in back-to-back years. Prior to joining CEDIA, Pyle was the senior director of marketing and product development at Gilchrist & Soames, a manufacturer of luxury hotel toiletry products.
In addition, CEDIA has announced the promotion of Olivia Sellke to director of public relations and industry relations. Sellke will continue to be responsible for all public relations efforts including increased outreach to the design and build press. She will also oversee the growth of the CEDIA Certified Instructor (COI) program, which trains CEDIA members to deliver presentations for CEU credits to architects, designers and builders. Sellke has been a key member of the CEDIA marketing team taking on progressive responsibilities over the last eight years.
“We know that Cris and Olivia will continue to build on the success of our industry relations efforts. It is such a critical component of the strategic plan and to the growth of the industry,” says O’Connor.