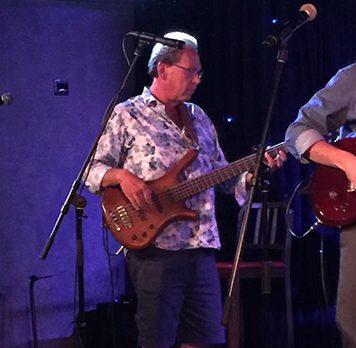 Before his time as president of Plainview, N.Y.-based DSG Distributors, Silkin was a working musician in the greater New York City area.

Getting to the point where he is now—a “human jukebox”—didn't come easy, it come through decades of hard work. Over the years, Silkin, a bass player, put in countless hours of practice and gigs throughout the Northeast region, including the competitive New York City and adjacent Long Island music scenes.

Looking back at the origins of his musical life, Silkin states the Paul McCartney ignited his interest in music.

“I started playing at the age of 10. I was in a band called Shock. We had two guitarist and a drummer. We were listening to the Beatles “White” album and “Ob-La-Di, Ob-La-Da” came on,” recalls Silkin.

“It was a song we all wanted to play, but without the bass line it didn’t sound right. So I went home that night and asked my parents if I can use the money I saved up working for my dad on the weekends to buy a bass and off we went. I learned every bass line on that album.”

As Silkin's musical tastes grew he started to pull from more than just McCartney. By the time he was 13, Silkin started playing gigs at local ice rinks, school dances, and other events such as carnivals.

“My influencers all came from the music we learned for the gigs,” notes Silkin.

During this period of his musical life Premonition opened for bands like the 4 Tops, The Temptations, Chaka Kahn and Kool and the Gang.

“I was heavily influenced by Verdine White of Earth With and Fire and Bootsy Collins who playing with James Brown and later with Parliament-Funkadelic,” Silkin points out.

“Today I’m kind of a gun for hire. I don’t play as often as I’d like to, but I still enjoy it as much as I did a life time ago.”

Silkin is a CE Pro All-Star Band alumni member having played with his fellow industry members a decade ago in Florida. Like the rest of the band Silkin is excited to play with past band members, as well as the new band members.

Those attending CEDIA Expo 2019 can see Silkin play live as a part of the CE Pro All-Star Band. The performance will be on Thursday, September 12 on the Smart Stage right on the CEDIA Expo 2019 exhibit floor right after the conclusion of the CE Pro BEST Project Awards gala that starts at 4 p.m.