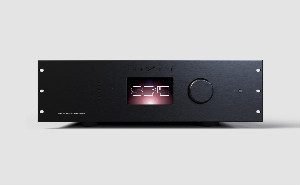 Dealers can expect to see the first product from the Bryston and StormAudio partnership when Bryston ships its SP4 preamplifier/processor during the second quarter of 2018.

Bryston has announced a collaboration with the European electronics manufacturer StormAudio, to be showcased for the first time at ISE 2018.

The newly formed partnership between the French-based audio hardware manufacturer and Ontario, Canada-based Bryston, will help each company produce an array of new products, according to both parties.

As a byproduct of the cooperative effort, Bryston will unveil its new SP4 surround processor and StormAudio will be leveraging Bryston’s Cubed Series amplifier technology. Bryston has in past years experienced successful partnerships with respected A/V brands such as Harman, PMC, Axiom and others.

The SP4 will be a 16.2-channel processor with an option to add four channels to achieve a 20-channel mode. The SP4 will support all popular immersive surround formats, such as Dolby Atmos, Auro-3D and DTS:X, as well as conventional formats. The SP4 will also feature Dirac Live room correction equalization technologies to provide professional integrators access to the latest technologies within a Bryston home theater the Canadian manufacturer states.

Bryston points out the SP4 will be built on a 3U modular platform to enable Bryston engineers to integrate advanced technologies and make upgrades available to consumers, extending the life of the product. The SP4 will also be compatible with popular control system platforms, including Savant, RTI, Control4 and Crestron. The Bryston SP4 preamplifier/processor is expected to publicly launch during the second quarter (Q2) 2018.

Utilizing Bryston's amplification platform, StormAudio will introduce 2-channel and 4-channel amplifiers based on the Bryston Cubed Series technology to give StormAudio a high-performance solution with professional studio-grade performance and reliability.

No timetable has been given for the Bryston-based StormAudio amplifiers.

Bryston hasn't offered a preamplifier/processor in several years. Previously the company developed its own home theater processors that include the SP-1, the SP-1.7, the SP-2 and SP-3 solutions.

Integrated Systems Europe (ISE) show attendees can see the Bryston and StormAudio collaboration in person in Amsterdam on Feb. 6-9 in Stand 1-N122.