Luxul's Easy Setup App is available from the Apple iTunes Store and the Google Play store to support both iOS and Android smart device owners. 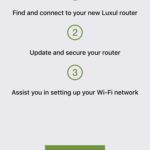 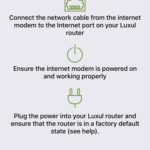 Ever since the dawn of wireless home networks people have wanted the setup process to be easier.

Of course, over the years, the setup of wireless networks has become easier due in part to people becoming more familiar with the technologies that enable Wi-Fi connectivity and through the overall maturation of these products.

Helping to really push the idea of simple setup even further—perhaps to a turnkey level—is the Luxul Easy Setup App.

The newly created app from Luxul is reminiscent of the setup app experience offered by Sonos and Lutron.

Designed to take the pain out of the setup and configuration of small- to medium-size Luxul networks, the app works as advertised to streamline the network setup process.

Depending on your perspective, the most important element of the Luxul Easy Setup App is the fact that it is available to both Apple iOS and Google Android users.

Because it’s designed to streamline the setup process, the app doesn't have a lot of bells-and-whistles included. It is straight forward, and its set-by-step popup screens work as designed to walk users through the setup and configuration of Luxul wireless routers and access points (APs).

Before moving onto the app, I would like to quickly cover some of the features in the Epic 3 wireless router and AC1900 AP.

The Epic 3 features 4×4 MU-MIMO Wave 2 technologies, along with Domotz for remote management options.

Luxul’s dual-band AC1900 access point provides 2.4GHz and 5GHz wireless, and compatibility with the company’s XWC-1000 Wireless Controller for use in standalone and multiple AP applications.

Downloading the app, I immediately opened the Easy Setup App on my iPhone 8.

After outlining what it will do, I simply followed the app’s prompts in a step-by-step process to configure the Epic 3 wireless router and XAP-1510 AP.

I started by selecting the Epic 3 as the wireless router. It took a few minutes and a couple of tries to successfully join the Luxul 3150 network.

I then created an administrator password, and the app will ask if you want to use DHCP or configure the IP address manually. I chose the DHCP method, which also took a few minutes and a few tries to successfully acquire an IP address.

The app then checked the firmware version of the Epic 3 to make sure it was up to date, and I then moved onto the XAP-1510 AP.

After selecting yes to choose the option of adding an access point to the system, the app recognized the access point and the setup was finished.

Setting up the wireless router and access point took less than an hour and it was a pretty painless process.

Testing both the 2.4GHz and 5GHz bands using the WiFi Deadspot app in multiple locations throughout my house, including the furthest points of my house, I found both bands to have similar upload and download speeds. The slowest speed on the 5GHz band I measured was 48Gbps, and the fastest speed was 88Gbps.

On the 2.4GHz band the slowest speed I measured was 54Mbps and the fastest speed was 83Mbps. Upload speeds were also similar with average upload speeds ranging from 23Mbps to 24Mbps.

Later I placed devices such as Alexa speakers, my wife and kids’ iPads and iPhones, and wireless printers on the network and things have run fine.

“I think the biggest takeaway from the app and the system is to keep the app in perspective. It does expedite the setup process and it does make the lives of integrators much easier, but do not think it’s going to make the install process a five-minute deal.”

Shortly after buttoning up the install I was notified the AP needed a firmware update to v.6.2.1. This is resolved easily by clicking the auto-update function, which can be found under the administrator’s tab in the Epic’s menu.

From my perspective, I think one of the strengths of Luxul’s networking components is the wide range of coverage the wireless products deliver. It’s debatable whether my home even needs an additional access point, but I installed it and it provides seamless coverage between the Epic 3, which is downstairs and its upstairs location.

Through its built-in controller option, adding access points isn’t a problem either, which is a strength of the app too.

I will say that I’ve found previous versions of Luxul's setup procedures already made the addition of access points easy, but the Easy App further simplifies that process, which can save time in larger homes and light-commercial environments.

Assessing the app and the Luxul system as a whole, it’s a terrific system and the app is a revolutionary step in simplifying the network installation process for integrators.

My only criticism about the system itself is that I would like to see Luxul add an auto reboot scheduling function to its products. I think this is a handy option that could save integrators time and make it so they don't have to remotely reboot clients’ systems every so often.

More importantly, I think the biggest takeaway from the app and the system is to keep the app in perspective. It does expedite the setup process and it does make the lives of integrators much easier, but do not think it’s going to make the install process a five-minute deal.

Considering it took me less than an hour to install the Epic 3 wireless router and XAP-1510 is fantastic considering I had no experience with the app. I think it would be unfair to expect faster setup times than what I experienced, even though I think some experience dealers can probably shave install times down by several minutes.

The one other thing dealers should consider is that the app is meant for basic installations and any customized network requirements does mean that dealers should approach the setup by skipping the app and using standard configuration methods.

Take a look at the slideshow for a step-by-step visual guide to using the Luxul Easy Setup App.