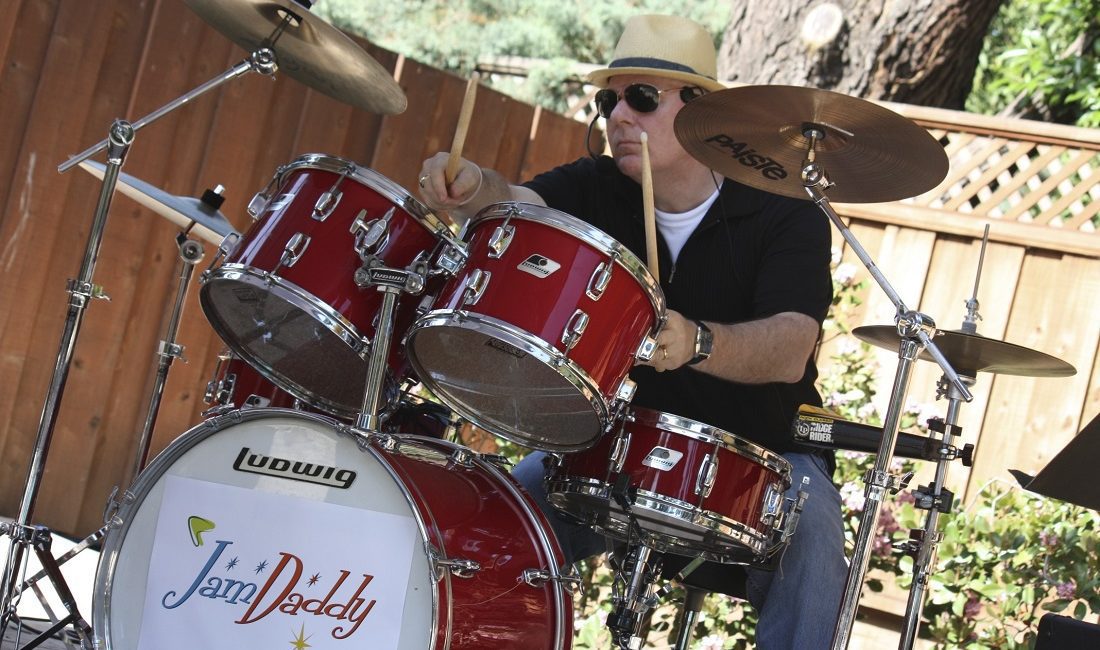 Starting as an 8-year-old, D-Tools chief marketing officer Tim Bigoness has been playing the drums nearly his entire life.

Growing up in San Francisco, Bigoness drew from the biggest names in rock music, including Ringo Starr, Charlie Watts, Keith Moon and John Bonham to form a drumming style that he says evolved from the athletics of his youth, to a more mature style that focuses on the groove of the song.

Bigoness took some time from his travel schedule to talk about his musical influences, his Bay area band JamDaddy, and some of his “go-to” drumming records.

How long have you been playing drums?

I’ve been playing drums since I was about 8-years-old. My parents were very supportive and started me with private lessons before I was able to join the band in elementary school.

What inspired you to start playing?

The Beatles. The Beatles used to have a Saturday morning cartoon show and I remember being 5- or 6-years-old watching every Saturday morning. My older sisters had Beatles records that I would listen to constantly. I originally started with guitar and after a few lessons decided I liked the drums better so I went that way.

Getting into your teens were you like most kids learning to play, did you discover drummers like Neil Peart, John Bonham, Ian Paice, Alex Van Halen, etc.?

I was a British invasion guy from the start. It started with the Beatles then I gravitated to the Who – Keith Moon was my favorite drummer, then Mitch Mitchell, Ginger Baker from Cream, then on to of course John Bonham, etc.

Since I started rather early, by the time I was in middle school I was well into playing along with albums. I would put on my headphones and play along to “Tommy,” “Live at Leeds,” “Chicago at Carnagie Hall” for hours.

Thankfully my parents were very cool and let me go for it. I tended to gravitate more to swagger than to technical excellence – obviously Neil Peart is a fantastic drummer but a bit clinical for my taste – I would say that John Bonham and Keith Moon shaped my playing style the most.

What did you take from your influences that you still utilize now as part of your drumming style?

I actually play more like Charlie Watts now than Keith Moon, which was just the opposite when I was younger.

I still play with a heavy bass drum like Bonham, but I have toned down the number of fills and appreciate the constant meter that Charlie has … it’s amazing to me that if you have ever seen the Stones – even at their advanced age everything starts and ends with Charlie Watts.

It’s amazing what he does and it’s so under the radar, the entire groove – I try and make that the core of my playing now.

I’m much more of a groove drummer. I think I have pretty good technical chops since I was fortunate to take private lessons from an outstanding teacher [who was a Dave Garabaldi contemporary], but I’ve always had a good ear and feel for the pocket.

Do you play out, are you in a band?

Yes, I am in a band called JamDaddy. We play locally around the East Bay Area [San Francisco]. Since we are all career guys and have demanding jobs we get together a couple of times a month and gig fairly regularly during the summer and fall.

What is your favorite part of playing live in front of a crowd?

I just enjoy playing whenever I can, and the energy you get from playing in front of a live audience is amazing. I do it because I love it and would do it for free, so whenever we get paid it is a bonus.

One of my good friends always said “Rock n Roll money is the best” and I completely agree.

In a recent Q&A with Robert D’Addario from Cleerline,  we asked him why is it so hard to capture a good drum sound during the recording process. What are your thoughts on capturing good drum sounds?

There are so many schools of thought on this from muffling to de-tuning that you can get lost in trying to chase the perfect sound and honestly it is so subjective.

The one thing I have always tried to do is have a well-tuned kit—it makes all the difference even if the gear is not great. I know a good drum sound when I hear it and I tend to tune my toms low and my snare tight.

Speaking of good drum sounds are there some records that you can cite that you feel have excellent drum sounds?

“Damn the Torpedoes” from Tom Petty has a huge drum sound. Jimmy Iovine basically changed the way drums were recorded on this album, and it is the same with “Some Girls” from the Rolling Stones—the snare just hits front and center.

What are your go-to drumming records?

The Who: “Live at Leeds”
Rainbow: “Long Live Rock and Roll” (Great double bass from Cozy Powell)
Chicago: “II”
The Tubes: “What do you want from LIVE” (Prairie Prince – awesome)

Can you explain your current drum kit?

Right now I am playing Ludwig and Gretsch. I have a Vistalite (drum kit) from 1977 that sounds huge, and it’s great for outdoor gigs. I also have a Gretsch Catalina club for smaller gigs. I have greatly reduced my footprint since my 1980s hair band days.

If you could play with any band, bass player, guitar player, keyboard player, vocalist, etc., who would they be?

I would love to play with The Who, Jimi Hendrix and Paul McCartney to bring it full circle.