Digital Projection has always sat on the cutting edge of large-screen video formats. The company was at the forefront of every new resolution that came out and other features as its projection solutions evolved.

And at every CEDIA Expo, Digital Projection’s booth could always be counted on for one heck of a theater experience.

This year, DP’s booth at the CEDIA Expo Virtual Experience, taking place September 15-17 (register at cediaexpovirtual.com) will continue that industry leadership on large-format video, albeit in the virtual platform.

When it comes to solutions, however, Digital Projection remains laser-focused on delivering innovative systems that mix performance and installation flexibility for custom integrators. In its CEDIA Expo Virtual booth (go to dpi.cediaexpovirtual.com during the event), the company will be shining a light on its Radiance LED product and its Satellite Modular Laser System (MLS) projection solution.

“This year we had planned to take some new projectors to the show as well as LED, so what we’re going to do instead is post some videos, we’ll have three presentations going each day twice a day,” Chuck Collins, vice president of sales at Digital Projection, tells CE Pro ahead of the event.

“One is on ‘Residential Reimagined,’ which kind of gives a broad perspective on the market itself and where our products fit into different areas of the house,” he says, noting those include home theaters, media rooms and now extending outdoors because the company has added outdoor LED options.

Speaking of which, another DP presentation will be a walkthrough of the Radiance LED product family, which has new resolutions and now as fine a pixel pitch as 0.7mm – the company showed a 0.9mm version last year.

“We’re introducing a pretty robust line of outdoor LED as well, starting with the finest pitch at 2.9mm, which look great in anybody’s backyard,” Collins points out.

The products go to 16mm, which are more intended for billboard-type signage solutions, so integrators who work in commercial markets can take advantage of those. “Our CEDIA dealers tend to branch out into all kinds of markets,” he says.

On the projection side, Digital Projection is showcasing its Satellite MLS, which separates the pure laser light engine, with the associated power and thermal management, to a remote location.

This enables a compact, virtually silent projection “head” that only contains the primary optics and yields greater installation flexibility. 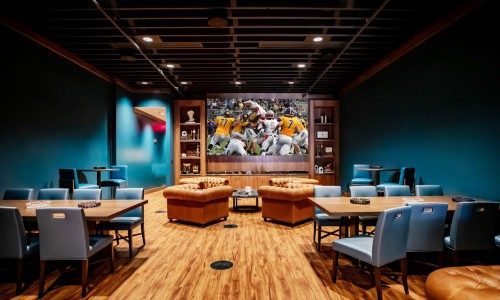 “It’s the most innovative product that I’ve ever seen and it’s really brought a lot of excitement back to me in the projection business,” Collins says.

Depending on the prism head used, dealers can stack up to four light modules in a rack. They can employ Digital Projection’s Insight head shipping later this year, which already provides its highest 4K chip and will be available in 8K as well, and Titan and Highlite heads upcoming.