Since discovering music and guitar back in junior high school, Vince Luciani has absorbed a variety of influences that include Rush, Jeff Beck and Pat Metheny.
Robert Archer 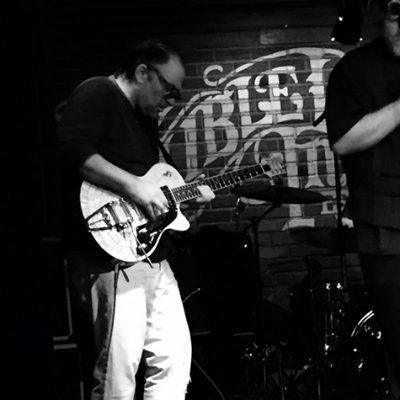 Vince Luciani of SurgeX has been playing guitar since junior high school and counts his musical influences as people such as Eddie Van Halen, Jeff Beck, Oz Not and Jimmy Herring.
Article:
CEDIA Expo | Events
August 15, 2019

If you excuse the pun, SurgeX's Vince Luciani will channel a little bit of Angus Young and bring some high-voltage rock-and-roll to the CEDIA Expo 2019 show in Denver.

Luciani first discovered music and the guitar in his grammar school years, and by his freshman year in high school, he says that he had his first good guitar.

“I was a school aged kid right smack in the middle of the 1970s. I started playing in the 8th grade using my sister’s classical guitar, but I wanted to play rock. 'Double Vision' by Foreigner and 'Ain’t Talkin’ About Love' by Van Halen did not sound right on an acoustic,” jokes Luciani.

“For the CE Pro All-Star Band gig, I was happy that someone picked 'All Right Now' since that was also on a high-school band setlist.  Funny enough, I recently looked up the song 'All Right Now' up on YouTube and found out I was playing it wrong back then!”

Looking to improve his skills as a guitar player back in his teen years, Luciani says that he sought out guitar lessons and by chance he ended up finding a guitar teacher that helped him to discover artists beyond the traditional guitar heroes like Van Halen and Hendrix.

“I took guitar lessons during high school from a monster guitar player who turned me on to progressive rock and bands such as Yes, Rush, King Crimson, Steely Dan, and what has gone on to become my favorite genre: Jazz Fusion. Listening to jazz fusion I discovered bands such as Return to Forever, Mahavishnu Orchestra, John Scofield, Pat Martino, Jeff Beck and BrandX,” he remembers.

“After college, my wife and I moved to Atlanta, which has a great Jazz radio station, WCLK. We were glued to that station and pretty much missed the 1990s rock scene. WCLK also helped me to develop my love of straight-ahead Jazz.”

Currently, Luciani says that he is a board member of JazzArts Charlotte, which is an organization that is working to keep the Jazz art form alive in Charlotte through youth programs and live performances.

He also notes that he participates in open-mic nights to help keep his guitar playing fresh.

Luciani adds that despite his love of jazz, he has not abandoned his musical roots.

“So, what is on my playlist?  If it’s the radio, it’s definitely classic rock.  That entire songbook from 1968 to 1979 is remarkable,” says Luciani.

“There are too many favorites here to list. But if I am on a plane, I have a bunch of fusion jazz downloaded to my phone. My current favorites are Wayne Krantz, Oz Noy, and Jimmy Herring. Also—Snarky Puppy—those guys exemplify great musicianship. There are other artists such as Medeski, Martin & Wood, John Scofield, Pat Metheny that I enjoy, and I can keep going.”

Those attending CEDIA Expo 2019 can see Luciani play live as a part of the CE Pro All-Star Band. The performance will be on Thursday, September 12 on the Smart Stage right on the CEDIA Expo 2019 exhibit floor right after the conclusion of the CE Pro BEST Project Awards gala that starts at 4 p.m.