Jason Barth, CEO and principal of The Premier Group's former band Push Down & Turn has opened for Peter Frampton, The Counting Crows, Neil Young and many other respected bands.
Robert Archer 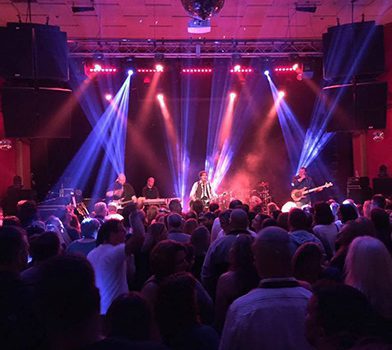 If anyone in the CE Pro All-Star Band can relate to the words of Journey's early 1980s hit “Faithfully” its Jason Barth, CEO, principal of The Premier Group.

Barth and his band Push Down & Turn toured extensively throughout the 1990s, serving as the opening act for many of music's biggest acts including Peter Frampton, The Counting Crows, Bush, Neil Young and Primus.

Recalling his musical beginnings, Barth says he developed an interest in music early taking lessons at a young age and continued his music education throughout his school-age years.

“I was classically trained on piano from the age of four. I later went on to study with Chicago-based jazz pianist and educator Frank Caruso,” he remembers.

“Upon attending DePauw university in 1990, I met my four fellow bandmates who would together form the rock band Push Down & Turn (PD&T).”

On the Road Again This Time to Attend CEDIA Expo 2019

Barth says that PD&T became known throughout the 1990s for its energetic live shows and its ceaseless touring.

Throughout the band's nearly 12 year career, PD&T recorded three studio albums, including a self-titled debut in 1991 (the record was rereleased 1994). The band followed up its first record with “12 Days in April” in 1995, and then a five years later it released “Undone.”

In between the band's three full-length albums, PD&T also released a 4-song EP and a 14-song collection titled “The Medicine Sessions” in 1997.

Supporting its records during this period, PD&T played with the Counting Crows, Kid Rock, Bush, the Smithereens, Peter Frampton, The BoDeans, and many more established acts.

In 1997, the band played on the H.O.R.D.E. Festival Tour with Beck, Toad the Wet Sprocket, Primus, Neil Young, and others.

In addition, the band more recently performed to a sold out crowd for the PD&T Reunion at the Vogue Theater in Indianapolis in April of 2016.

Barth points out that PD&T’s fans attended the show from 38 states across the country.

Today, Barth is an aspiring electronic music producer and enjoys collaborating in his own studio with others, including talented musician/drummer/producer Dan Giffin. Together, their first live performance in the electronic genre was opening for Tiesto, who is widely considered the “Godfather of EDM” (electronic dance music) and was voted the “Best DJ of the last 20 Years.”

Barth adds that he hopes to continue his foray into electronic music and release his first EDM solo tracks in 2020.

Focusing on the upcoming CEDIA Expo 2019 show, Barth and many members of his custom integration team will attend the event.

“I’ll be attending trainings and touring the CEDIA Show floor tirelessly with my very talented team—we were just awarded CEDIA’s 'Integrated Home of the Year: Level IV' for the second year in a row,” he notes.

“We’ll be meeting our key vendors and soaking up the knowledge.”

Those attending CEDIA Expo 2019 can see Barth play live as a part of the CE Pro All-Star Band. The performance will be on Thursday, September 12 on the Smart Stage right on the CEDIA Expo 2019 exhibit floor right after the conclusion of the CE Pro BEST Project Awards gala that starts at 4 p.m.

Announcing the Winners of the 2022 Best Electronics Systems Technologies Awards

The winners of the annual CE Pro BEST Awards have been announced during CEDIA 2022. See this year's list of top AV products.

Announcing the Winners of the 2022 Best Electronics Systems Technologies Awards

The winners of the annual CE Pro BEST Awards have been announced during CEDIA 2022. See this year's list of top AV products.