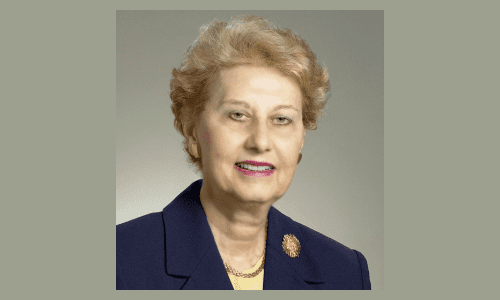 Ruth Rodale Spira, co-founder and co-chairwoman of Lutron, has passed away at the age of 90. She was pre-deceased by her husband of 60 years, Lutron chairman, co-founder, and director of research, Joel Spira, in 2015.

In a statement, Lutron noted:

“We are deeply saddened by the passing of our Co-Chairwoman and Co-Founder, Ruth Spira. In the building of Lutron Electronics, she and her husband, Joel, worked together in every step of developing Lutron, which will remain a private family owned and operated company.

Together, Ruth and Joel brought this company from a dining room table in New York City to making Lutron a global leader with lighting controls and window systems that are sold in over 100 countries around the world. Ruth was a driving force behind creating a culture of the Lutron family, where all employees and everyone who touched our company are a part of our family.

Ruth’s accomplishments were acknowledged by an honorary PhD from Muhlenberg College. She also gave back to the community in many ways through involvement with multiple boards and charities.Ruth created Lutron’s communications department and touched many parts of the company. She travelled extensively with Joel visiting customers, suppliers, Lutron offices and manufacturing operations. Wherever she went, she always made people feel welcome and a part of our Lutron family.

Coopersburg resident Ruth Rodale Spira, Co-Founder and Co-Chairwoman of Lutron Electronics, died August 31st in Allentown, Pennsylvania, at the age of 90. Ruth was pre-deceased by her husband of 60 years, Lutron Chairman, Co-Founder, and Director of Research, Joel Spira, in 2015.

Ruth was born on December 9th, 1928, to J.I. and Anna (Andrews) Rodale. She received a bachelor’s degree in botany from Wellesley College and was awarded an Honorary Doctorate from Muhlenberg College.

Following her graduation, Ruth joined Rodale Press which was founded by her parents. In time, she became Editor of Organic Gardening and Farming and saved up her money for a trip of a lifetime.

An adventurous person even at age 26, Ruth traveled to Paris in the 1950s as a single woman (which was almost unheard of at the time). During her trip to Paris, she became fluent in French and developed a love of French and Asian food, as Paris was (even back then) a very international city.

Upon her return she settled in New York and became a researcher for an encyclopedia company. Soon after her move to New York, she met her husband, Joel. They enjoyed their life in New York and lived on Riverside Drive in Upper Manhattan.

Ruth continued her love of Chinese and European food and would have many cooking dinner parties for their friends. This developed over many years into a passion for cooking and many wonderful meals enjoyed by family and friends

Joel and Ruth started Lutron in the spare bedroom of their Upper West Side Manhattan apartment. Together, she and Joel grew Lutron from a local Coopersburg-based entrepreneurial business that sold two products, to the global leader in lighting and shading controls.

In the early days, Ruth was hands on in the quality control area making sure all products were properly tested. As a leader in more and more areas of the company, she always advocated for the highest quality in both product and communications.

Ruth was the cornerstone of the company. She created and implemented Lutron’s familial culture of inclusiveness and community, welcoming everyone through the door as family. Today, nearly 60 years later, this warm culture is the hallmark of Lutron.

Ruth’s impact on the company could be felt worldwide. She established Lutron’s Marketing Communications Department in 1982 and went on to develop much of Lutron’s marketing materials used throughout the world.

For decades, she was active with numerous organizations, including the Allentown Art Museum, the Allentown Arts Commission, the Pennsylvania Chamber of Business and Industry, and the Lehigh Valley Wellesley College Group.

Ruth previously served as a trustee for Cedar Crest College and as a board member for the DeSales University Pennsylvania Shakespeare Festival. She was an active member of Lutron’s Advisory Council, a council of distinguished advisors who provided counsel and advice on Lutron’s future.

Ruth loved her family and upheld numerous traditions including Wednesday movie night with Joel. With a passion for international food and travel, Ruth was a woman ahead of her times and introduced Joel to new cultures and new ideas.

She had a passion for cooking and published Naturally Chinese: Healthful Cooking for China in 1977 to offer a healthy approach to preparing Chinese food.

She is pre-deceased by her parents and brother Robert Rodale. In lieu of flowers, donations can be made to the American Parkinson Disease Association, 131 Parkinson Avenue, Staten Island, NY, 10305 orhttp://www.apdaparkinson.org. Services will be private.