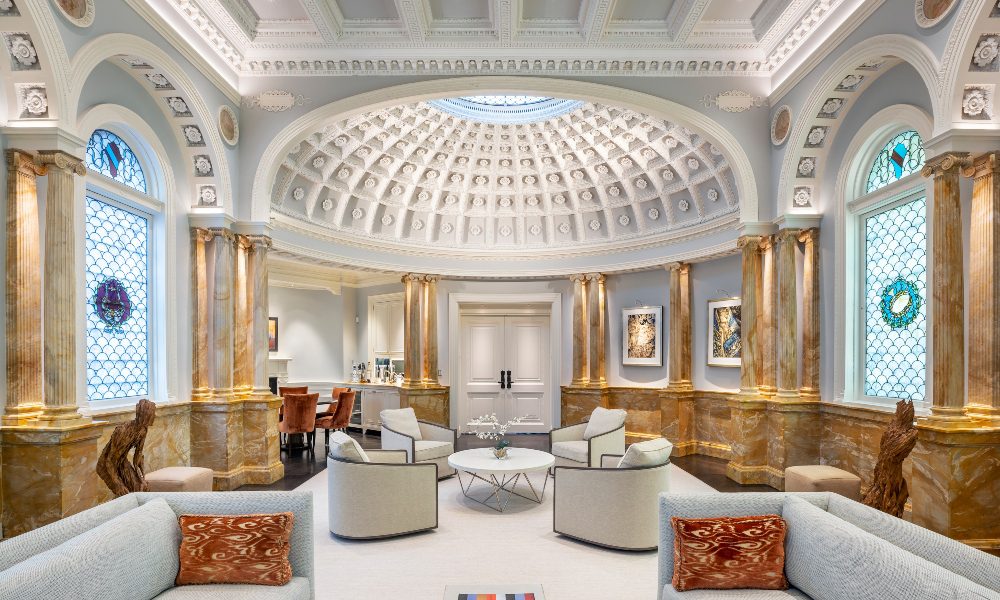 Built in 1883 and designed by the prestigious architects Rotch & Tilden, this historic home in Boston, Massachusetts’s Back Bay neighborhood is an authentic time capsule of Victorian design. However, hidden behind closed doors in this abode is a space that is unique, even for this neighborhood, and it’s here where Boston integrator, TSP Smart Spaces was brought on to translate a timeless love of music with a retrofit for the modern day.

The Music Room, as it is called, was added back in 1897 to host private performances for international musicians. A half dome ornamented with plaster rosettes, a coffered ceiling wit h a raised corona, and imported marble floors and columns all highlight the performance stage where famous musicians such as Ferruccio Busoni and Arther Rubinstein played as recently as the 1940s.

With music having evolved considerably since Victorian times, you would think that this space would being undergoing a tremendous audio installation. However, keeping in line with the theme of a visual performance to accompany audio, lighting was the core concern of the clients, transforming an impressive, albeit dim, space into an illuminated entertainment room worthy of taking home Gold in CE Pro’s 2022 Home of the Year Awards for a retrofit project.

A Luxury Entertainment Space 125 Years in the Making

“We coordinated the lighting design and fixture selection, designed all of the lighting control systems, and then project managed the entire team to completion,” says Michael Oh, president and founder at TSP.

“Even after having so much time in the project over two years during the pandemic—we were astonished with the result. In 125, this room has never looked as good as it does today, all because of the high-performance lighting and perfect control.”

Before the improvements by TSP, the Victorian space relied on four large pendant lights in the main coffered ceiling and a single shallow pendant in the dining nook. The room’s exterior walls primarily consisted of plaster on masonry, which made new wiring runs challenging.

“We overcame this challenge through an extensive design and discovery phase, where we opened the ceiling and ran heat scans of the floor to verify radiant heating and in-grade fixture locations. From there, we worked with Fourth Dimension Lighting out of the U.K. for the lighting design and coordinated fixture selection. Fixtures from MP Lighting, Apure, Beulux, and Klus were all selected,” says Oh.

From a control standpoint, TSP used Lutron Homeworks QS to oversee the 18 Lutron Hi-Lume Premier 0.1% drivers for more than 250 feet of cove lighting, which replaced the aging, incandescent festoon lighting.

Home of the Year Awards • Lutron