If you attended CEDIA Expo 2018 and visited MartinLogan’s sound room, anticipation was likely high for what might be in store for its CEDIA Expo 2019 demo.

The veteran audio company, known for its freestanding electrostat speakers, went for some mystery last year. Its speakers were concealed, leaving attendees to wonder what could be producing the gorgeous sounds.

Turns out, it was a bit of Masterpiece theater staged by MartinLogan. As in, at CEDIA Expo 2019 in Denver, Colo., the company revealed the speakers to be the new Masterpiece CI line, due to be released in early 2020.

Among the clips used to show off the Masterpiece products’ impressive and dynamic performance were clips from Bohemian Rhapsody, A Star Is Born and Alita.

“We’ve been known for large electrostats and our dealers love them … but we also have a huge market with our dealers doing CI jobs,” Zell says.

The company saw an opportunity to enhance the quality of its custom products so dealers could install higher-performance architectural systems. MartinLogan launched the Masterpiece Series of electrostats a couple of years ago, hence the CI namesake.

Here’s a look at the driver makeup of the lineup, which includes the flagship Statement 40XW (the Icon 3XW was not used in the demo). All are in-wall models except the Sistine, which you may have guessed from its name is an in-ceiling speaker: 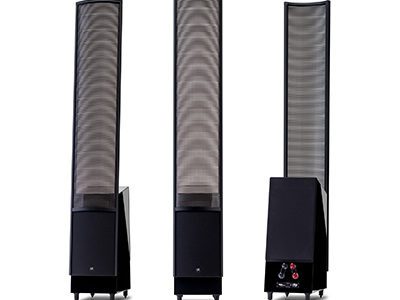 Besides the new speakers, MartinLogan showed some updates to its popular Motion Series loudspeakers. Red walnut and matte white finishes are now available to go with gloss black.

“Many of these models have been around five-six years, they do very, very well,” Zell says. “We took some time to go back, refresh and tweak them a little, bring some new colors on.”

Integrators can fully configure the units using an intuitive web-based interface that controls every available setting for every zone and every input.

The MDA8 powers up to four zones with eight total channels at 60 watts per channel into 8 ohms (or 120 into 4 ohms).

Zones can also be bridged for a high output mode with 200 watts per channel into 8 ohms.