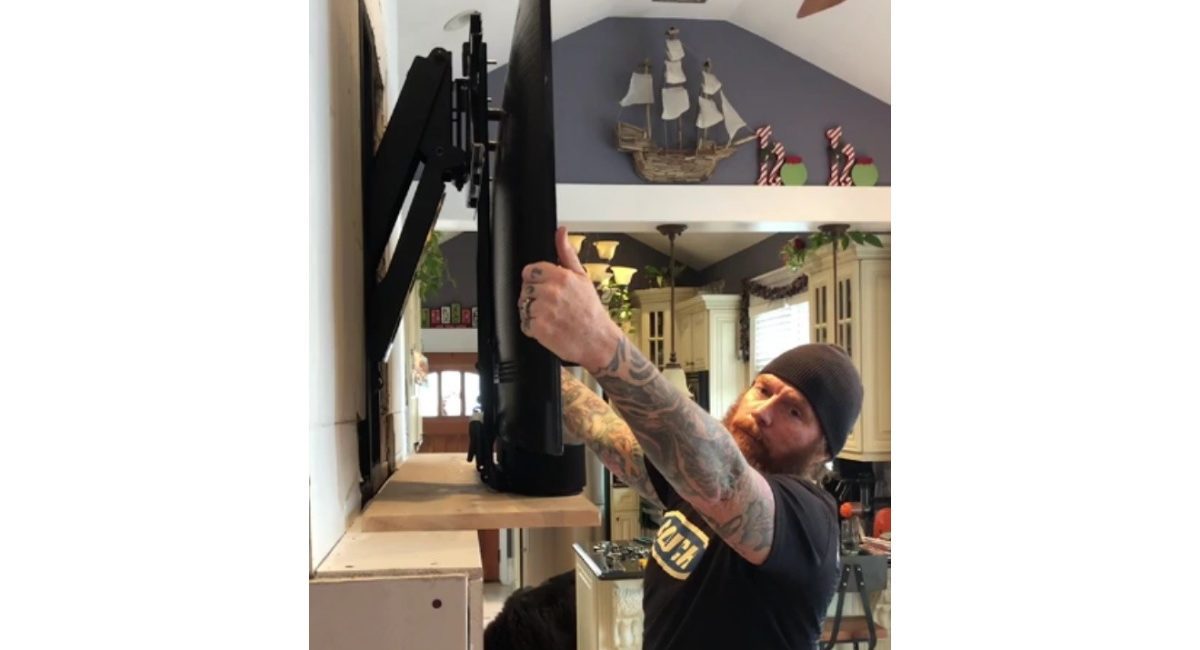 The old proverb “Necessity is the mother of invention” certainly rings true for Doug Warren, a self-employed journeyman electrician in New Jersey. Warren used his engineering skill gleaned over the past 30 years to design and eventually patent the Hide-A-Mount over-fireplace TV mount to minimize the profile of his over-the-fireplace TV and allow the display to pivot outward from the bottom to clear the mantel before dropping down.

Two years ago, Warren was remodeling his living room with a classic custom-made wood bookcase surrounding the focal point fireplace. The project was crying out for a dropdown mount for the TV over the fireplace and the MantelMount 340 was the ideal solution.

“I love the MantelMount product. The quality of the product is great. But after I installed it, the sideview was not aesthetically appealing,” he recalls. “I have crazy OCD… everything has to be perfect and level. I like to have everything looking pretty nice.”

Problem solved, right? Nope. With the TV fully flush into the wall, the display would not clear the 12-inch mantel below when it is extended and dropped down. The only way it would clear the mantel was to mount the TV very high on the wall near the ceiling, which was too high visually, according to Warren. So, instead he went to work on a new solution for his fireplace TV mount.

“I just went to town like mad scientist putting some different ideas together,” he recalls.

Two years later after a lot of hard work and engineering, the result is the Hide-A-Mount pivot bracket that allows the over-fireplace TV to pivot out past the mantel.

“You can pivot it out to clear up to a 12-inch mantel and the bottom of the TV sits just 1 inch off above the top of the mantel, so it is aesthetically pleasing,” he says.

Out of Sight Mounting Patent Awarded

Warren now makes Hide-A-Mounts to accommodate not just the MantelMount 340, but also the 540 and 700 manual dropdown mounts. His latest version works with the MantelMount 860 motorized mounts.

He recently was awarded 18 of his patent application claims for the design of its fireplace TV mounts, with one patent approved.

“It was exciting. It was two years of hard work. I thought I was crazy at the time, but it’s turned out pretty cool,” he comments

The modification to MantelMount product does not affect that product’s warranty, according to Warren.

“What we do is hydraulically press a 3/8-inch steel rivet, called the backer bolt, to the back of the arm. That backer bolt has an adjuster on it that, depending on the depth of sheetrock, will adjust how deep that arm can retract back into the box because you don’t want the arm to go all the way back into the box and pull the TV too far back into the drywall. The second part of the device is what we call the pivot bracket that bolts directly to the MantelMount backing plate. It is basically an adjustment bracket,” he explains.

To handle the sales of the Hide-A-Mount, Warren has formed a company called Out of Sight Mounting Solutions.  Warren fabricates and ships everything directly from his shop in New Jersey, including the recessed boxes, which are 5.5 inches deep and designed for 2×6 framing. Warren has a goal of engineering the system so the backbox can fit into a standard 2×4-inch framed wall.

To date, Out of Sight Mounting Solutions has sold about 20 of its fireplace TV mounts via its website.

“We are very proud of what we have been able to accomplish. Getting the patent was a huge step for us,” he says.