Greg Durkin of Enact Insight says streaming media has been a series of good decisions and bad decisions by content providers.
Jason Knott 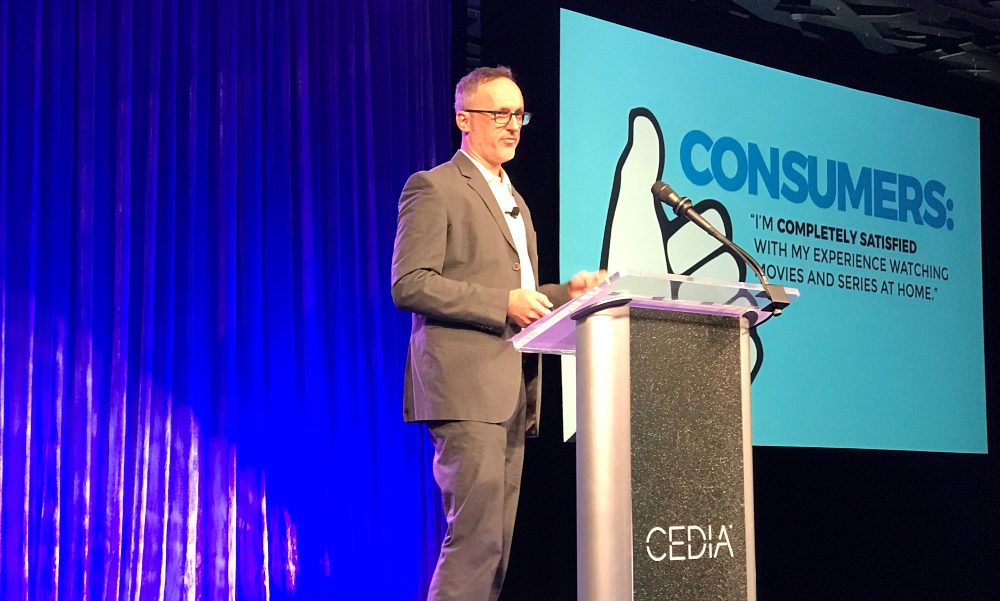 The landscape of streaming media is littered with weak decisions from mega companies such as Blockbuster Video, Netflix, CBS/Paramount+, Starz, and others, but the prospects for integrators to simplify and organize streaming media for their clients is strong. That’s the message from Greg Durkin of Enact Insight who was the keynote speaker at CEDIA Expo 2022 in Dallas. According to Durkin, there have been many poor decisions made by content services that has left several in difficult positions, while others have thrived.

Among the mistakes he cites include Blockbuster could have purchased Netflix for just $50 million but passed on the deal. Also, he says Starz had the first streaming service called Starz Vongo in 2006 but the marketing was too limited and it shut down in 2008.

“Blockbuster was in business 14 years before it developed a subscription model, and that was only done because Netflix came on the scene,” says Durkin, reminding the packed audience that Netflix started out as a mailing service of DVDs, long before adopting a streaming service model.

Durkin also believes Netflix has over-priced its streaming service. He says Disney+ is the most successful streamer because the company has kept its price points modest despite being continually rated as having the best content. Peacock is rated as the worst. HBOMax and Hulu are also seen as strong players. Durkin predicts that Apple will eventually purchase Roku, and that Starz, Peacock and Paramount+ will all eventually merge, fail or be acquired.

But it’s not just the streaming services that have made some compromising decisions, so have the commercial theatrical chains. In general, AMC, Regal and Cinemark have overpriced their tickets, which is leading to a continued decline in moviegoing. That trend boosts home theater.

Durkin also presented interesting data about high-value customers who tend to spend money on building home theaters. According to the data, that demographic is likely to increase their hours of watching streaming content by 19%, boost their use of gaming consoles by 23%, increase their use of Apple TV by 51%, and elevate their spending on video on demand by 42%. All of that data can help guide integrators as they approach their customers.

Other interesting trends among high-valued clients is a 30% increase in the use of TikTok and a 46% gain in listening to podcasts, but a 7% decline in the use of Facebook.

Durkin also highlighted the importance of “Recommendations” in streaming services platforms. Those are vital to increase viewing time. Why? Because when surveyed, 63% of the general public declare that they have never heard of a particular movie or TV series. Those “unknown” shows can be discovered using the “Recommendations” menus. Amazingly, there were more than 10,000 new movies or TV series released in 2021 alone.