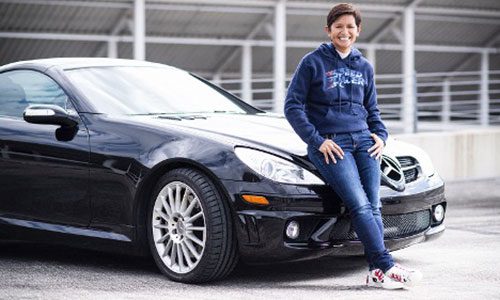 On weekends, Raya Sevilla is often found under a sports car tinkering with the engine. Typically, the engine and the car body are an intentional mismatch. Making them fit together, and the engine purr, are, for her, the epitome of fun.

“It began with putting an AMG engine in a Mercedes-Benz that never was meant to have an AMG engine in it,” she recalled. “Can you actually do it? And if the answer is yes, what are all the modifications required to make it happen?”

“Then, obviously, the moment you put a big engine into a little car, you have to put it on a racetrack,” she said.

Sevilla’s hobby of building custom cars out of mismatched parts and then smoking the competition is emblematic of an education and career that recently landed her on the C-suite podium as ADT’s Chief Technology Officer.

These platforms resemble the cars in her garage  built with mismatched parts and tuned to run fast. The newest one is being custom built from the ground up and will integrate with technology stemming from ADT’s recently formed partnership with Google.

“It’s going to be a combination of physical hardware as well as data and machine learning and artificial intelligence,” she said. “We’ll get to ambient security where you no longer arm and disarm the alarm. Security is just there when you need it and when you don’t, it’s in the background.”

An accountant with an engineer’s passion

Don Young, ADT’s Chief Operating Officer, invested in Sevilla to realize this vision of the smart and helpful home because he believes she is uniquely equipped to achieve it while simultaneously continuing to provide unparalleled value to ADT’s customers on existing security platforms.

“She has a compelling way to cost effectively deliver value that doesn’t cost additional dollars unnecessarily for customers,” he said. “That gives our customers greater comfort that the bill that they pay is worth every cent.”

Sevilla’s attention to the bottom line for ADT and ADT’s customers is rooted in her education: she graduated from Syracuse University in New York with a dual major in information systems and accounting.

The majors were what Sevilla calls “an interesting combination.” Accounting, she said, seemed practical and could open doors to a career track admired by her parents, who immigrated to the United States from the Philippines. Information systems appealed to Sevilla’s inner engineer.

During her junior year at Syracuse, Sevilla was recruited for an internship with a major accounting firm. A partner read her resume and asked her to write a software program for the firm’s billing department. At the end of the internship, they offered her a job  in accounting. She took it.

“I spent four years getting an accounting degree and with all due respect to every accountant on the planet taking all the boring accounting classes, I was like, I’m going to get my certification,’” she said.

In New York, certification means two years of practical experience. She entered a dual program that had her pore over financial statements half the time and the other half on the road as an information technology consultant  in other words, writing code for clients.

“After I got my piece of paper that says, Congratulations, you’re a certified public accountant in the State of New York,’ they kicked me and said, you’ll be better served in consulting,’” Sevilla recalled.

More than a decade into a consulting career, Sevilla was on the partnership track, which would leave her selling the company’s services rather than solving client problems. It wasn’t for her.

As Sevilla shared news of her pending departure, a client from a telecommunications company offered her a job that included an opportunity to develop an enterprise resource planning system, which is a type of software used to manage day-to-day business activities, as well as build and manage an accounting team with 120 employees.

The management experience, Sevilla said, helped her find success at ADT. She was recruited to the security industry by a former colleague at the telecommunications company who’d left for the Chief Information Officer role at ADT. At the time, ADT was separating from Tyco International, a security systems company, and Sevilla was tasked with building ADT’s own data warehouse and a team to run it.

“I like to learn, and I learn most from change as opposed to the status quo,” she said. “So if there’s something that needs to be changed or upended, I’m likely to be involved somehow. I just gravitate toward it.”

During Sevilla’s early years at ADT, she focused on the digital transformation of operations. For example, she led a team of engineers that developed a digital contracting system for field agents and implemented modern lead and order management databases for internal sales teams.

She also took over responsibility for ADT Pulse, the company’s first-generation interactive security platform which enables customers to control their smart home security system from anywhere through a smartphone app. Pulse runs on a platform built and managed by a third-party provider. The service grew faster than ADT expected and crashed around the time the app crossed the 500,000-customer milestone.

Sevilla met her first real-time crisis. For the fix, she turned to a trusted engineer, Mark Reimer, who is now the vice president of product engineering at ADT. She sent him to the service provider’s headquarters with free rein to do anything necessary to stabilize Pulse and make sure it could continue to scale.

“For her to just trust me  to say, Do what you need to do, keep me informed, but go fix it, this is really important to our customers and our business’  a lot of leaders may not have done something like that,” Reimer recalled. “In turn, that helped stretch and grow me to want to do my best.”

Reimer stabilized Pulse, which continued to scale and today is used by more than 1.8 million ADT customers. Sevilla took the incident as an opportunity to nudge ADT’s senior leadership team to consider alternative pathways to deliver smart and helpful home security.

Those discussions led to an exploration with a home automation application development startup; the launch of Command and Control, which is ADT’s current smart home security platform; and, when the partnership with Google closed, the decision to develop ADT’s own platform.

“Our upcoming platform will meld together ADT’s 150 years of security experience with Google’s AI and ML expertise and hardware technology,” she said.

Building for the future

“What we’re building is going to go ahead and stay ahead of our competition in terms of differentiation, keep the reliability and the trust part inside of our brand and deliver customers value that they’ve never seen before,” he said. “Raya delivers in spades on all of those things.”

A key to her success at ADT is the investment she makes in the people around her. She knows every team member’s favorite cartoon character, a personal connection she uses to draw out their best work, according to Molly Byer, who runs the program management office for Sevilla’s organization.

Communication channels with her team are wide open via an instant messaging app and, for team related issues, visible to all members.

“People don’t just get the end communication. They get the background, the context and the conversation around the issue,” Byer said. “That has been instrumental in making us efficient and able to turn on a dime and help her with whatever she needs.”

In turn, Sevilla is there for her team, according to Reimer, who builds and maintains the devices and software that enable ADT to run like a fine-tuned engine. She’s there to listen, to brainstorm and strategize. She’s also there to defend and protect her team’s decisions.

For example, Reimer said, he always loops in Sevilla on issues with vendors that he suspects will escalate so that she, in turn, can proactively address the challenges through the appropriate channels.

“It just makes things go so much more smoothly,” he said. “And, at the end of the day, we achieve the goal.”

Sevilla’s goal at ADT is to produce a next-generation platform that is as solid as the Sistine Chapel, which attracts millions of visitors a year to look up and admire the painted ceiling.

“We all enjoy the painting by Michelangelo,” Sevilla said. “Why? Because the architect and engineer built the Sistine Chapel to last. And that’s what our next-generation platform is. It’s less about the painting on the ceiling and more to do with building something that’s going to last and can sustain 10 million customers.”