Did you grow in 2019? Be recognized as a CE Pro Rising Star!
COVID-19 Update CEDIA EXPO SUBSCRIBE
Audio/Video 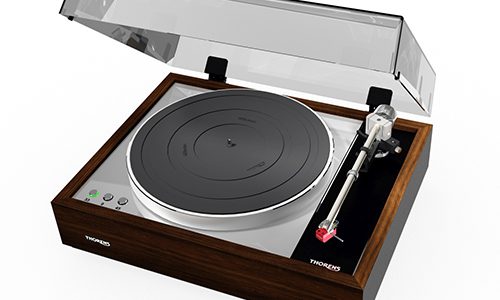 Available from its American distributor American Audio & Video, Thorens has announced its 1600 Series of turntables.

The product line includes the 1600 and 1601 turntables, and Thorens states the products are engineered as the successors to its original 160 Series.

Originally introduced in 1972, the TD160 became a go-to table for audiophiles with its inner suspension system that isolated the unit’s arm, platter and bearing to help protect records from skipping.

The original TD160 also featured an isolated belt-drive system from the table’s 7-pound platter, and a straight tone arm.

Thorens points out the TD1600 and TD1600 feature mid-century design influences from the original TD160 Series, as well as a choice of walnut or black gloss finishes, brushed aluminum plinths and hinged dust covers.

The TD1600 and TD1601’s plinths utilize Alucobond, which sandwiches aerospace materials between layers of aircraft-grade aluminum.

Other features in the new turntables include 12-volt synchronous motors encased in non-resonant housings, and outboard linear power supplies.

Additionally, the 1600 Series products utilize three conical steel springs that are attached to a large, highly damped based. The springs are adjustable, and Thorens asserts its new sub-chassis design eliminates the shortcomings of the original 160 Series products.