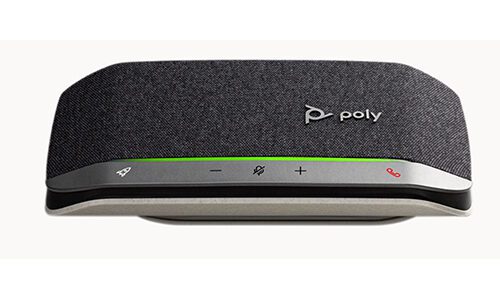 The Poly Sync 20 is a $170 speakerphone that can be used for hybrid work applications.

Providing WFH (work from home) and hybrid workers with an easy-to-use conferencing solution, Poly has announced its Sync 20 speakerphone.

Designed for a range of environments that includes residential, the Sync 20 was developed to provide users with speakerphone features, as well as a speaker for use with music and other audio content, and it also provides users with the ability to charge smart devices.

Poly points out that the product’s programmable button provides users the ability to simply choose their favorite function through a simple button press. Those function choices can range from play/pause music, last number redial, to voice assistant for example to make a favorite function easy to access.

The communications company points out the Sync 20 is also portable to allow users to bring the speakerphone to their offices or from the office to their homes.

Other features include the Sync 20 offers include Bluetooth 5.1 to support connectivity to a range of smart devices, and Poly emphasizes the unit’s microphones have a range of more than 7 feet. For conferencing applications the Sync 20 provides noise and echo reduction, and it rates the speakerphone’s frequency response at 80Hz to 20kHz.

In addition, the company notes the speakerphone’s battery provides up to 20 hours of battery life, and it takes the battery four hours to fully charge.