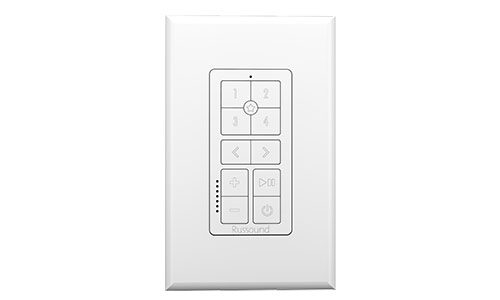 The new Russound IPK-1 keypad is available for $199.

According to the company, it designed the new keypad to provide users with high levels of convenience and usability, and the “always-on” control interface enables easy access to a system’s control functions, including single rooms and zones.

Russound states the IPK-1 single gang keypad utilizes Power over Ethernet (PoE) for power to help streamline the installation process and to match nicely with its products that include its MBX-Series Wi-Fi streamers, and any zone of an MCA-Series Controller Amplifier.

The company explains that once the single Ethernet cable is connected to the keypad, all integrators need to do is associate it with a room or zone through the use of its WebConfig system setup tool. After the setup of the IPK-1 single gang keypad is complete, Russound points out the interface provides homeowners with two-way communication feedback information such as volume levels and system status via the keypad’s LEDs.

Russound adds that it ships the IPK-1 single gang keypad with black and white Decora inserts to help the keypads blend into a range of interior environments. Russound also emphasizes that it does not include Decora wall plates with the keypad.